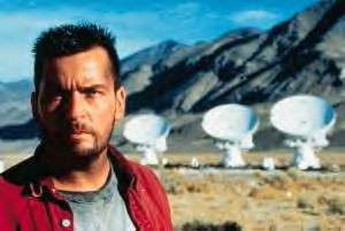 While most of the wildly implausible scientists in cinema history have been women e.g. “nuclear physicist” Denise Richards, here’s a male entry in Charlie Sheen, radio astronomer: “Yeah, call us up a couple of hookers, we’re looking at quasars tonight!”. While there’s some questionable science, not what you’d expect from the creator of Pitch Black (why must two signals on the same frequency come from the same place?), most of the script is, fortunately, more intelligent than the casting.

We have human-imitating aliens, engaging in a spot of “terraforming” of Earth through the greenhouse effect; it’s a nicely subtle and understated takeover. Ron Silver is fabulously evil as Sheen’s boss (and a Mexican guard), and if the basic concept borrows a little too much from the various incarnations of Invasion of the Body Snatchers, Twohy adds the motivation and method to his aliens, that was missing from those inspirations. I do wonder what part of extra-terrestrial psychology made them resort to sub-007 tricks, involving falling bathtubs and scorpions, in order to dispose of their enemies, but overall, this is far superior to the likes of its contemporary, Independence Day.