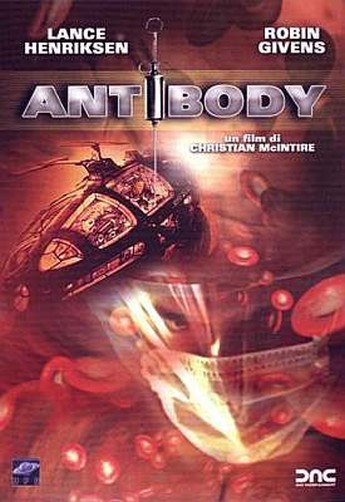 FBI Agent Richard Gaynes (Henriksen) is made the scapegoat for an explosion at the Russian consulate in Washington, and is drummed out of the service. A year later, working as a private security consultant in Munich, a conference he’s overseeing is hijacked by terrorists, whose leader has the detonator for a nuclear device implanted in his body, wired so it will set off the bomb if he dies. He is captured alive, and fortunately for the plot, the key speaker at the conference is a professor who is an expert on nanotechnology, and just happens to have been working on miniaturizing a craft, so it can be injected into a patient’s body in order to treat whatever it is that ails them. Gaynes boards the craft, piloted by Dr. Saverini (Givens), and is injected into the unconscious terrorist to track down and defuse the device before it triggers an atomic disaster. Yes, folks: if what you have been waiting for is a cheap, poorly-made and direct-to-video East European ripoff of Fantastic Voyage, then have I got a film for you. Of course, if you’ve been waiting for that, you should really get out more.

This is embarrasingly-bad from the get-go: even though I’ve never been to Washington, it’s clear Bulgaria is no stand-in, and during the terrorist take-over, one victim has multiple blood squibs go off under her shirt after she falls down. The film is littered with factual clunkers, like the prof being “the first German awarded the Nobel prize for science.” I guess a) the Nobel Committee decided to lump Medicine, Physics and Chemistry together, and b) ignores the fact that Germany has had more laureates than any country bar the US and UK. Er, Albert Einstein? Anyway, the CGI is a poor substitute for the sets which graced the original, though Mrs. Mike Tyson is just as convincing a scientist as Racquel Welch. Henriksen has little to do for the bulk of the movie, and looks appropriately bored – presumably composing stiff emails of reproach to his agent. Crew members Pauls and Ivanova add a certain amount of life as bickering midgets; or at least that’s how they appear to be in their first shot. It’s an idea completely discarded thereafter – the same should have been done at an early stage with the entire concept.