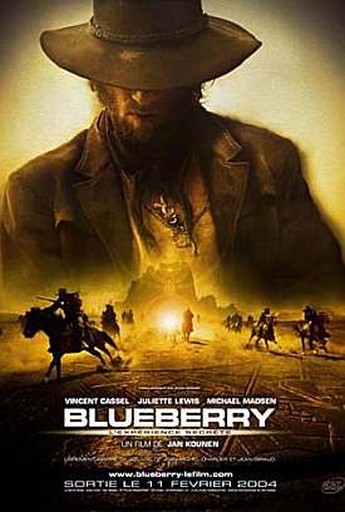 Based on a French comic-book series by Moebius, this is an intensely-trippy Western that probably has more in common with El Topo than anything else. It made a great deal of sense when I read that the director had extensive first-hand knowledge of drug-assisted shamanic rituals, because large chunks of this are spent trying to reproduce that experience in cinematic terms. In between those sequences, it’s the story of Blueberry (Cassel), a town marshal who is troubled by an event in his youth which resulted in a girl being shot, and the hero fleeing into the mountains, from where he is rescued and brought up by the natives. When Blount (Madsen), the man who was also involved, passes through town, seeking a map which he believes will lead him to lost treasure, Blueberry opts to follow his nemesis out into the desert, and finish what he thought had ended years previously, battling Blount in the spirit world.

It is a unique beast, and features some staggeringly-beautiful cinematography, sweeping over the Western landscape with an eagle-eye. However, the shamanic angles and sequences are hideously overplayed, not least the climax, which is a good 20 minutes of psychedelic imagery that leads to… Well, very little, except a graphic shot of Lewis’s hairy crotch, hardly adequate payback for the massive self-indulgence of these scenes (your mileage may vary, naturally. I’m sure Lewis fans will also enjoy, more than I did, her rendition of Danny Boy). It would have been improved if Kounen hadn’t bothered, and had simply made the movie as a straight genre entry – an escargot Western, if you like, told in an eclectic mix of English, French, Spanish and native languages, with an impressive cast. The psychotropic stuff could have been replaced by plot progression; Blueberry falls off a cliff, and the next thing, he’s a town marshal under sheriff Ernest Borgnine. Odd flashes of inspiration can’t stop this from being disappointing and feeling like a waste of everyone’s time. And, no, it’s never explained why he’s called Blueberry.