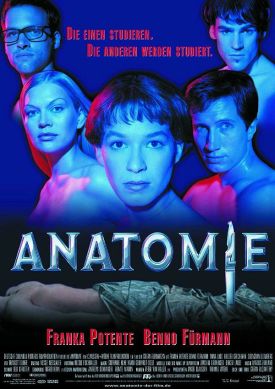 Occupying an uncomfortable middle ground between conspiracy movie, medical thriller and stalk ‘n’ slash, is this German film which pits medical student Paula (Potente) against a group of mad doctors, for whom human suffering is no bar to research. It starts off well enough, tweaking things in interesting ways. Paula’s room-mate (Loos) may be a slut – and so, obviously, marked for death – but she’s also the only one to out-score Paula on the test, and the group, who call themselves the Anti-Hippocratic League have a long, disreputable and well-established place in history running back past the Nazis.

As this unfolds, Paula’s detective skills are drawn out nicely, and Potente portrays her effectively and sympathetically. There’s also a grim beauty in the House of Wax concept, which sees people with interesting diseases turned into medical statues, while soothing musak is played. However, the director has absolutely no idea what to do with the plot once it’s established, and a lack of genre experience shows itself in a second half which is largely taken up with running around badly-lit corridors and screaming. If you want real horror, your best bet is to try listening to the dubbed version – I couldn’t even sit through the trailer.