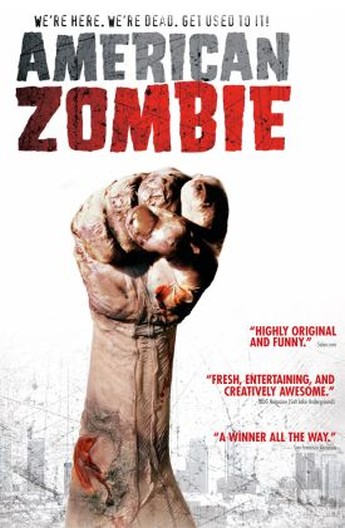 The zombie apocalypse will not be televised. Instead, according to this mockumentary, it’ll cause barely a ripple, as many of those infected, will simply continue living as normal – except they’ll be dead, as they go to work, try to manage relationships and also deal with new issues such as maggots. They’ll have to put up with discrimination and, the film suggests, will group with other like-minded and non-alive individuals. Solomon and Lee play the makers of the documentary, who peel back the lid on the culture, with Basis as Ivan, who works in a convenience store and has a live girlfriend who gives him his “zombie speed”, and Vicente plays Joel, the founder of the ‘Zombie Action Group’. ZAG, whose slogan is “We’re here, we’re dead – get used to us” – organizes an annual festival, Live Dead. It’s strictly zeds only, but Lee and Solomon eventually get an invite. However, that’s where the film turns darker, as the nature of the event becomes clear: it’s not just the bonding experience it at first appears.

It’s the shift in tone that largely makes the film work. Up until that point, it has been lightly amusing, but mostly forgettable, and is less a zombie pic with social satire, than a social satire with zombies. It’s clear they are intended to be a metaphor for…something. Homosexuals most likely, with immigrants as a back-up selection. It’s not particularly subtle, and not particularly amusing, either, though there are some nice ideas, such as how the lower-functioning victims of the disease have become slave labour for enterprising businessmen. However, the longer the festival goes on, the more the film moves towards horror, and what initially seems like a liberal-leaning plea for peace, love and the singing of Kumbaya as we hold hands with our zombie brothers, ends up rather darker. It’s all the better for it: just a shame it meandered around in circles before getting there.