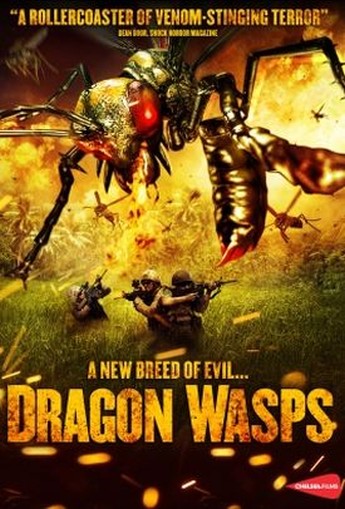 The first question is: is it “Dragonwasps” or “Dragon Wasps”? The sleeve and IMDB go with the latter, but the actual on-screen title omits the space, so I’m going with one word, like dragonfly – one of the insects whose DNA has been combined to create the creature that inhabits the South American jungle in this monster movie. Entomologist Gina (Juillet) is there, looking for her father, who mysteriously vanished after making a strange phone-call to her; his pack turns up, containing a digital camera with pictures that hint at something nasty. She and sidekick Rhonda (Noel) head in to the forest along with US “military advisor” John Hammond (Nemec). First, they meet the local drug-runners, led by creepy one-eyed, voodoo chanting dude Jaguar (Roland), and then the titular critters – which is where the DVR decription which hooked us kicks in. “Soldiers battle gigantic flying insects that shoot fire” Truly, the word “that” is the only one there which is not full of win. The only possible improvement would be adding “Topless women” at the beginning; you could also replace “insects” with just about any other noun, and it’d be a great movie pitch.

Of course, the reality is considerably less, even for someone like me, whose dislike of wasps borders on a phobia. The problems are severalfold: the effects are generally crappy, but that was expected, and has never stopped us enjoying badfilm before. The issue is more the heroines, who are so pathologically unlikeable and irritating, that half-way through we started referring to them as “Paris and Nicole.” There are also little more than occasional nods towards the level of wit we’d hoped to see: one character does mention both “Sand Sharks” – another American World Pictures production – and “Mansquito”, an entry ion Nemec’s filmography. More of this kind of thing would have been welcome. Indeed, more of the fire shooting would have helped too: it’s barely used: inteads of the wasps barbecuing the enemy, they prefer to take the humans back to the lair, and lay eggs in them. While this leads to some interesting hatchery, most of this plods along at a level compatible with background noise. You probably won’t turn it off, yet you’re even less likely to be riveted to the screen.