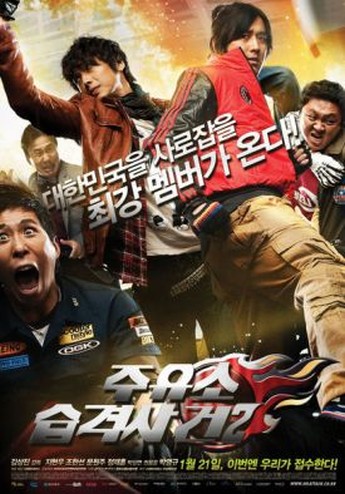 A decade after the events of the original, the same gas station is ransacked by a new gang of motorcycle punks. The fed-up owner (Park) goes out and hires his own team of thugs (“violent ex-convicts preferred”) to work at the station and guard it. When a small splinter group of bikers stage an inept raid, it seems his dreams have come true, but his harsh treatment of his staff leads them to rebel, lock him upstairs and run the gas station themselves, to raise enough funds for the wages they’re due. Unable to run credit-cards, they’re a cash only business, but the 50% off sale they run to draw business has some unwanted consequences. Over the course of the night. visitors to their filling station include a rival owner, a hijacked prison bus, and the original gang, who have been lured back by a sting, carried out before things went nozzle-shaped.

It was about a decade ago that I last watched the original, but rather too much of this still seemed familiar, such as the confrontational relationship between the owner and those who hijack his station, the cast of kooky characters who visit it, and the sense that there are probably a large number of jokes that we in the West are not quite getting. Still, enough time has passed that this is still adequately entertaining: there are some interesting visual flourishes and if you don’t like one character, don’t worry, because there’ll be another one along in a minute. In terms of plotting, it’s kinda loose: the story doesn’t do much than throw another ingredient into the pot, and stir, though the climax (which largely revolves around everyone’s uncertainty as to whether or not diesel is flammable) does generate more tension that the rest of the film. There’s something oddly retro about the entire concept of getting your tank filled up by an attendant, but if you can get past that, and the inevitable cultural dissonance, it’s acceptably entertaining, if largely forgettable.