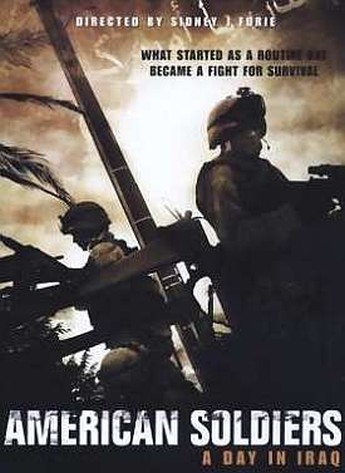 I read some truly savage reviews of this, mostly criticizing the military accuracy of various aspects. I will cheerfully admit to knowing little and caring less about authenticity in war movies, which is perhaps why I didn’t hate this as much as many people. It’s the story of one day in the life of a patrol in Iraq, as they try to make it back to base – their sergeant was shot in the first encounter of the morning, and from there there’s an almost non-stop barrage of RPGs, IEDs, suicide bombers and automatic weapons fire coming in their direction. There’s a brief respite when they link up with members of the Ohio National Guard, on their way to deliver prisoners to a secret facility. But this just gives the soldiers another dilemma, when they realize what’s going on there and have to decide whether to be tacitly complicit in the torture, or take a stand. This is more of a diversion: it’s not long before they are back into the hell which is war in general, and Iraq in particular.

It definitely does stretch credibility to believe that a single patrol would be capable of bringing down so much sustained wrath in a brief period. The marksmanship (or lack thereof) displayed by the anti-American forces also becomes amusing eventually – hey, it was good enough for the Imperial Stormtroopers. However, the film hits the ground running, and there’s hardly a moment’s pause for breath from then on. Character development is almost entirely through action, and if this is, of necessity, in broad strokes, there are moments of genuine humanity which peek through, both among the soldiers and some of the Iraqis they encounter. The no-name cast works in the movie’s favour too, since without a star, there’s no sense of comfort with regard to who will survive: anyone can die, literally at any time. It does get somewhat repetitive in the second-half, and there’s not much sense of escalation in the proceeding, with the tenth attack largely the same as the first. However, it’s not nearly as bad as some of the criticism would have you believe: as a pulse-pounding actioner, it’s entirely adequate.