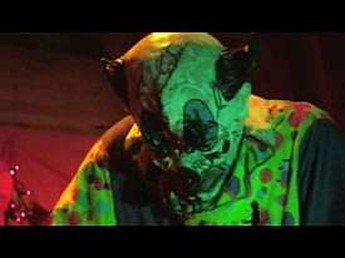 Would it be churlish of me to point out that a fear of clowns is actually called “coulrophobia”? Anyway… Dr. Wethers (Lauren) brings a group of trouble teenagers to her estate for a therapy session to treat their fear of clowns – though it’s as much therapy for the doctor, who is equally terrified by them. Admittedly, she probably has more justification than most, since her psychotic brother killed both their parents, in clown garb, before being sent to an asylum. Snuffles the Clown, as he was known, escapes from the institution, and returns to his family home, kidnapping the young participants and extending his murderous spree. Meanwhile, back at the asylum, the apparently-paranoid Patient X (Yonak), who has been an inmate ever since being found near a travelling carnival, claims to know what’s going on. However, will she be able to convince the staff in time that she’s not just another loony? 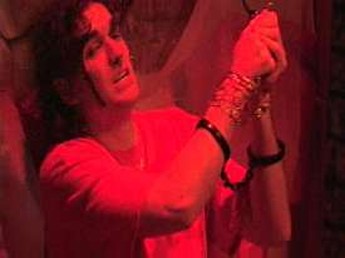 There’s no denying the creepiness here, with the “evil clown” an archetype in popular culture – most notably of late, Heath Ledger’s Joker. However, the film never exploits this to any significant effect for the first hour. It’s only when Snuffles has collected his subjects and really gets going that there’s any real horror content, with his methodical torture, mutilation and dispatch of his helpless victims. That has a raw, pointless nastiness to it that is quite effective, and it’s just a shame that, if you’re like me, your interest will largely have flat-lined by this point. Everything about film is off-center, from the stilted performances through to the choppy, disjointed way in which scenes are edited together: this might have been the aim, to try and create a surreal, nightmarish feel, like something by David Lynch. However, the actual effect is to disinterest the viewer: there’s nothing here which would pass as a sympathetic, or even more than marginally-interesting character. I suppose it might have more impact if the viewer was actually scared of clowns: the rest of us will probably find little here capable of inducing terror.