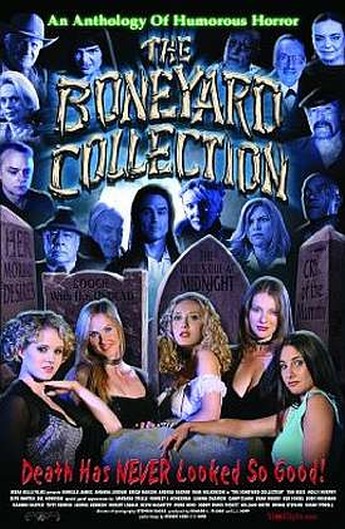 The film collects two shorts and two…well, let’s call them “extended pseudo-trailers,” (EPTs) for want of a better term, filmed over five years, into an anthology set in a graveyard, overseen by Dr. Acula (the late, sadly-missed Forrest J. Ackerman) and his henchladies Aurora (James) and Electra (Wilkinson). The most amazing thing about these is the horror star-power accumulated by Plumb, with the names appearing, albeit mostly briefly, in addition to Ackerman: Tippi Hedren, Barbara Steele, Robert Loggia (we thought he was dead), Brad Dourif, Kevin McCarthy, Ken Foree, Susan Tyrell, even Bobby ‘Boris’ Pickett (we were sure he was dead. Hang on. Yep, April 2007). On that side of things: wow. Simply, wow. Unfortunately, most of the content doesn’t live up to the fire-power, and the lead actresses… Well, let’s just say, it’s clear why Steele is a genre icon, and they aren’t. The film starts off with the lengthiest sequence, 45 mins or so, entitled Her Morbid Desires, about a film-shoot making a Dracula movie, which is plagued by mysterious deaths. Outside of the parade of celebrities – one party scene includes Brinke Stevens, Elvira, Ray Harryhausen and, bizarrely, Rod McKuen – there’s very little memorable here.

The next section is an EPT for Boogie With the Undead, in which an all-girl band take on an army of zombies. While not a bad idea, it’s outstays its welcome, and would have been better off at 90 seconds in length. The third part, Cry of the Mummy is the best, telling the tale of Egyptian mummy Shep (Rees), who wants to make it big in Hollywood, but refuses to do horror, because of the typecasting. It’s got plenty of amusing moments, not least a session where Shep and his agent have various projects pitched to them, of ever-increasing idiocy – I was particularly fond of I, Dolphin, to be told from the point of view, and in the language of, the titular aquatic mammal. With subtitles, of course. It’s got plenty of nicely-satirical jabs at LA and its culture, or lack thereof. The film finishes with another EPT, for The Devil’s Due At Midnight; as with its predecessor, it’s too long, though I enjoyed Foree’s turn as a witch-hunter. Overall, it’s more miss than hit, and those who might appreciate the plethora of horror references, will likely turn their noses up at the PG-natured approach, which seems about forty years out of time.