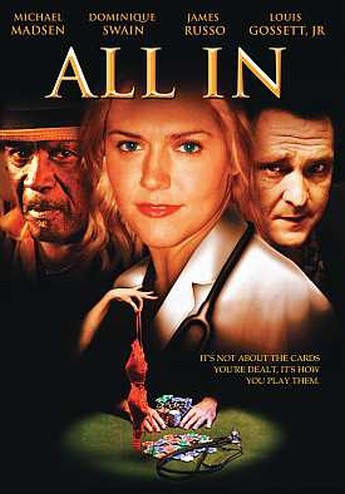 We don’t like poker, but there have been some good films made about it – Rounders comes to mind – where there is enough going on around the game to make for interesting viewing. Here, there’s no shortage of stuff going on [our heroine’s relationship with her long-lost father; a hospital conspiracy to extort money from illegal immigrants], but it’s all forced to take a back seat to the shuffling and dealing as medical student Ace [Swain] progresses through a poker tournament to the inevitable showdown. While we have a basic understanding of the game (on the royal flush beats a straight level), the portrayal here is clumsy and, according to reports from those better acquainted with the game than I, laughable. It certainly generates none of the tension or excitement one would imagine the game is supposed to generate. The film really needs to decide what it wants to be. If it was a hardcore poker film, it should have been that. Similarly, it could be a medical thriller, family drama or romantic comedy, and been acceptable fun in any of those genres. Instead, it makes half-hearted stabs in each direction, and ends up going nowhere.

The cast – Swain aside, since you can see why her career has been as aimless as this film since bouncing on Jeremy Irons’ lap in Lolita – deserve better. Madsen is his usual reliable self, while Russo chews the scenery effectively as a malevolent doctor, and Porch does solid work as his accomplice. Indeed, this is like a recipe where all the ingredients are present, only in entirely wrong proportions. You have some decent ideas and a cast who can execute, yet the end-result is painfully half-baked. And did we mention the incessant product placement for a Mexican beer and a poker site? Neither of which I’m going to do them the honour of name-checking, since they didn’t pay us. The imagination shown in the director’s previous feature, Disturbance, is sadly missing. I’m going to call a spade a spade and, speaking from the heart, this is no diamond in the rough. If Vallelonga was clubbed, that would suit me…