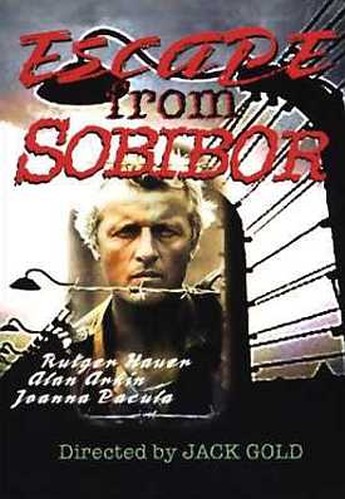 Is the Holocaust suitable fare for any fictional depiction? Or is it simply too horrific, and any depiction inevitably becomes a trivialization? Difficult question: I, personally, find Ilsa, She-Wolf of the SS to be at least honest in its exploitation, whereas Schindler’s List…I am rather less certain about. Sobibor occupies a middle-ground, and that may be the best place. The first half makes for depressing and occasionally disturbing viewing, with its depiction of everyday life in the Sobibor death camp – the tone is set early on, with the arrival of a trainload of terrified Jews, accompanied by a Strauss waltz over the loudspeakers. While inevitably restrained in its depiction – this is a TV movie after all – it is no less chilling. Indeed, the horrors of Camp 3 might be best left to the imagination, since any depiction would seem trite and gratuitous.

After the arrival of Hauer’s Russian soldier, the pace (mercifully?) quickens, with an escape plan formed: kill the dozen SS men who run the camp to be killed, and hope the Ukrainian guards, left leaderless, will crack. The tension is built, as the plan barely dodges disaster, until the inmates are finally forced to bolt for the nearby woods, through a minefield and under heavy fire. According to Wikipedia, “only about 50 escapees survived the war… Some were recaptured and shot by the Germans in the next few days, but survivors’ accounts also indicate that many of the escapees were killed by the Polish underground and civilians.” If largely glossed over here, the film does provide a different side of the Holocaust, one in which prisoner were not just sheep led to the slaughter, but fought back, preferring death on their own terms, to that offered by the Nazis. That certainly helps, and while I may have qualms about some aspects [were the sexes really allowed to mingle in the way shown here?], this one gets a respectful pass for its portrayal.