Based on the title and cover, I watched this on the expectation of reviewing it on my Girls With Guns site. However, it’s much more an ensemble piece that I expected, so didn’t qualify there. Here, though, it fits right in, not least because I did not realize at the time that it’s an Arizona-based production. It comes from the same person who gave us Battlefield 2025, a film with which it shares a number of similarities, some cast, and at least one big problem. That was a bunch of people, running around the desert fighting an alien. This is a bunch of people, running around a forest (in the Globe/Miami area of Northern Arizona) fighting multiple aliens. I guess this is artistic development, after a fashion. 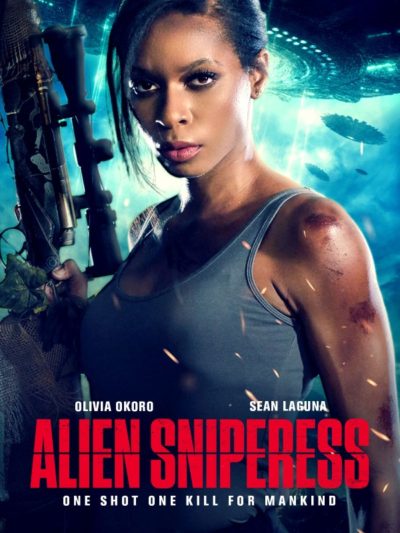 They arrive on Earth in the wake of a meteor shower, and are parasitic slugs. They latch on to their victims and control their behaviour, which tends to involve them engaging in random acts of violence against anyone in the area. This is just getting under way when the titular soldier, Chioma (Okoro) has to deal with the sudden death of her boyfriend, literally seconds after he has given her the ring. Bit of a dick move that, I’d have said, but whatevs. His dying wish was for his younger brother Aaron (Laguna) to be taking up North to his grandparents, so Chioma heads out of Phoenix with some friends for support, after a quick drone shot of Chase Field and the 7th St overpass.

It’s not long before she her her assorted travel-mates find themselves deep in the woods, fending off attacks from alien-controlled folk. And this being Northern Arizona, guns are not exactly in short supply. Meanwhile, researcher Dr. Clark (Dillingham) has been co-opted by the government, and is now giving regular press conferences with updates on progress. However, it appears that budget cutbacks have hit this particular branch of the federal authorities hard, because the media events about this global threat, take place in what looks very much like a rural school hall (top). This thread is really Exposition Central, since Dr. Clark never meets Chioma, or any of her friends.

The slew of characters here work very much against the film, because the story loses almost all narrative flow, as it attempts to keep all their stories moving forward. It’s exactly the same problem which affected Battlefield 2025: we end up not caring about any of them (what purpose does the radio DJ server, for example), and indeed, there are points where you simply lose track of what’s going on. There is no shortage of action, with plenty of gun-battles. The problem is, little of it has any emotional investment for the viewer, and it just becomes so much background noise. There are a couple of unexpected deaths, so it deserves some points for unpredictability there. In just about every aspect though, it’s a forgettable slab of SF/action, without even the occasionally excessive deaths which Battlefield offered for your amusement.