When they say, “They don’t make films like this any more,” they might very well mean specifically our subject here, which would be startlingly problematic from a modern perspective. It takes place in what was then colonial Rhodesia, where police officer Terrick (Faulkner, some forty years before leading the Tarly family for Game of Thrones) has his wife (Sybil Danning in a minor role) brutally raped and murdered by local terrorists. Terrick sets out to take revenge on the perpetrator, which goes against the principles of his boss, Bill (Lee). Despite some qualms on his part, the army are called in to hunt Terrick down, before he can complete his vigilante mission.

Yeah, Rhodesia, which was at the time a thoroughly apartheid-based regime: they’re the heroes here, folks. Probably worse still, the leader of the terrorists – who would be redefined as “freedom fighters” by 2022 standards – is an albino known as Whispering Death. He is played by German actor Frank, wearing what I guess is albinoface. In the film’s defense, Mr. Death is described as white on more than one occasion, though it’s unclear if this refers to his race or his albinism. Not that this would particularly help, since it would imply the local black population couldn’t even do terrorism properly, without a white man to lead them. There’s no real way in which any of this would seem remotely like a good idea nowadays. 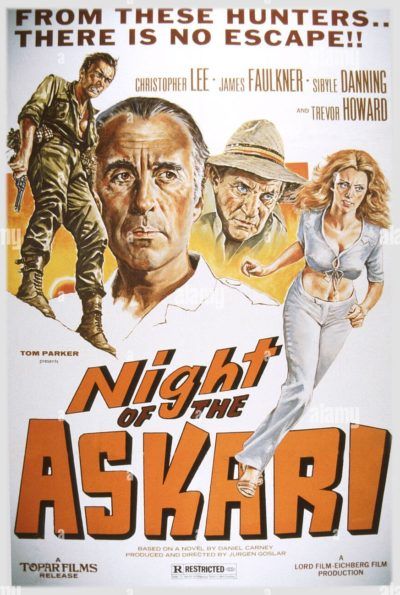 Personally though, I think it’s guilty of a considerably worse crime than political incorrectness by modern standards: being frequently quite dull. It certainly wastes a rather good cast, perhaps most memorably Howard as Terrick’s father-in-law. He is resolutely old guard in his steadfast belief that he built the damn country, and they can take it back when they pry it from his cold, dead hands. Lee kinda goes down similar lines, though there is a bit of nuance, in that you get some sense Bill might be aware that times are changing. To what extent they actually were, I’m not sure, with the Rhodesian system limping on until 1979, when the terrorists/freedom fighters eventually won. From a modern perspective, it’s this feeling of being a cinematic time-capsule, capturing a particular moment in history, which is perhaps the most interesting aspect.

It certainly beats just about anything the revenge side of things has to offer. This plods along, literally, with so many scenes of Terrick and his faithful black servant trekking through the veldt. Or whatever the correct landscape-y term might be. It has the feel of a cheap Western, relocated to a different continent, and with African tribesmen effectively replacing the Red Injuns. It doesn’t do enough to set Terrick up as someone the viewer will care about, undersells the trauma of the event, then renders the retribution in about the least satisfying way possible. I could barely summon the enthusiasm necessary to shrug in uninterested disdain by the end.