It’s New Year Eve, and twenty-year-old Nico (Bódalo) is looking for love in all the wrong places. He’s not having much success, which isn’t too surprising, since Nico is hardly what you’d call a catch, with a set of teeth too large for his mouth. Indeed, as the title suggests, his dry spell extends for… twenty years. Despite the mocking of his friends, he’s therefore more than willing to go home with middle-aged Medea (Martin), and overlook little flaws. Such as her fondness for roaches, or the way she keeps a cup of her menstrual blood on the bathroom shelf. He’s going to lose his cherry, and that’s what matters, isn’t it? Hey, I’d have done the same in his shoes.

Naturally, to the surprise of absolutely nobody except for Nico, things do not go quite as planned. Firstly, her boyfriend, Araña (Amilibia) shows up, hoping to make up for their earlier argument, and is none too happy to find a cuckoo in his nest. That, however, is small beer compared to the other problem. Due to an unfortunate incident involving her blood and his semen, Nico is now the central figure in an occult ritual performed to honour a Nepalese goddess of fertility: his further… participation is now required. Otherwise, there will be consequences, considerably beyond the usual problems of a one-night stand, such as an awkward rash and pain when peeing. 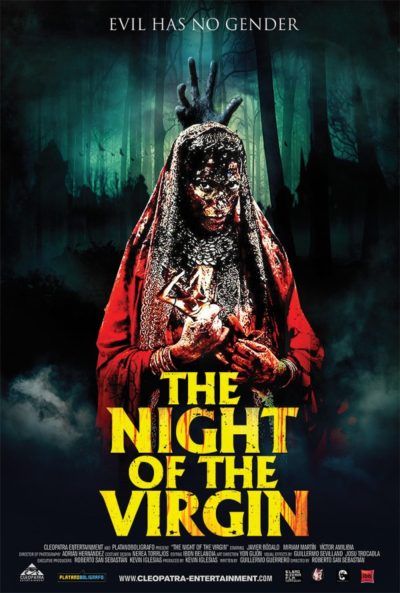 There are basically only three significant speaking roles here, and outside of the opening sequence, almost the entire film takes place in Medea’s apartment. All I can say is, I hope they weren’t planning on getting their security deposit back for the location, because the cleaning fees alone will have vacuumed up all of those. At least, eventually. You do need to exercise patience, because the first half of the film is likely too long, and sluggishly paced. We get the idea: Medea is weird, and Nico doesn’t care. Can we now move on? How about now? Er, now? Until Araña starts banging on the door, the film is in a holding pattern, having got its point over, then decided not to progress any further.

However, when it lets rip, it truly lets rip, especially from the moment we discover the point of the fertility ceremony. We get what is, hands down, the most repellent depiction of birth I’ve ever seen. It’s an excruciating, extended ordeal which will have all right-minded individuals squirming. Let’s just say, babies are not supposed to come out of there… Beyond that, it becomes a full-on fight for Nico’s survival, taking on not only Medea and Araña, but also the new-born offspring, which is hungry for flesh, rather than mother’s milk. Oh, and it’s mostly played for laughs, though I’m not tagging it as comedy, since only the most battle-hardened will stick around for those. It’s forty good minutes in a 100-minutes movie, and you could only wonder what might have been. Still, those forty left me feeling I had not wasted my time.