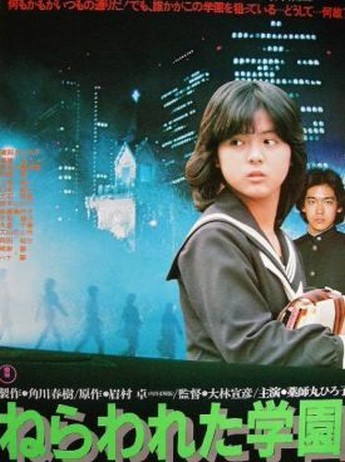 I was really surprised to discover this was made in 1981, because the execution looks like something which might have come out of the early sixties, it’s just that primitive. The heroine is Yuka (Yakushimaru), a high-school girl who is gradually coming to the realization that she has supernatural powers, and can compel people to do her bidding. Maybe it’s the white-haired guy in a cape, showing up in her dreams, that’s the clue. Anyway, she doesn’t initially do much with this talent, except help Koji (Takayanagi), the boy with whom she is smitten, to win at kendo. However, a new student shows up, Michiru (Hasegawa), who doesn’t have as much restraint, and is soon clawing her way to the top of the school pyramid, and turning it into a neo-fascist dictatorship. Oh, yeah: and you know who’s behind all this? Demonic entities. Or maybe they’re from Venus. I’ll admit, I’n not 100% sure on the details here. Regardless: will Yuka get over her moral scruples and start to use her god-given (or ET-given, whatever) talents for good? Or simply for high-school sporting glory?

There’s a lot of potential here, for something which combines elements The Wave and The Faculty, into a satire of education and conformity, which Japan has in abundance. Unfortunately, it seems to be aimed at about an 11-year-old audience for some reason, though I suspect even they would find the woeful optical effects far short of adequate: they look like little more than someone taking a marker-pen and drawing squiggly lines round the characters, directly on the print. Subsequent research shows that, apparently, the director is somewhat known for their insane cinematic, ah, “vision.” I wish I’d known this in advance, as I’d have been prepared better for elements such as the impromptu musical number which breaks out during gym class. I suspect, if you were in the right mind-set, this might be remarkably entertaining. Unfortunately, I was short on the beer and/or psychedelic mushrooms necessary to achieve such a mental state, and expecting something entirely different. As a result, I found this instead an largely tedious experience, even taking into account the copious opportunities for easy mockery available.