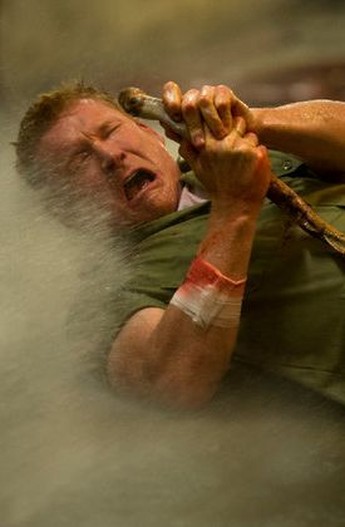 Virtually all I knew about lampreys going in, was that an English king was supposedly killed by a surfeit of them: without checking, I’m thinking one of the Edwards, but that’s perhaps just playing the odds, there having been more King Edwards than any other name. Ah, it was actually Henry I, the youngest son of William the Conqueror. However, their icky appearance and behaviour – one character here describes them as like “an anus with teeth” – make them ripe for cinematic exploitation, and that’s where The Asylum come in. Their latest feature debuted, not on the traditional SyFy home, but on Animal Planet, during their “Monster Week.” Not exactly our usual viewing, but when you come across a title like this on the cable listings, we’re heading straight for the ‘Record’ button.

It is, of course, complete dreck. You know this going in, purely based off the title, and expectations were fulfilled, right from the opening scene which sees a guy pulled back into a lake by a lamprey which is attached to the back of his head. Quite how it manages this feat is never explained, but it’s the kind of film where coherent, logical explanations are not necessary. Such as, why lampreys are now climbing out of the water, burrowing through dams, apparently on their way to invade Chicago, and coming out of every water-bearing device, from taps to toilets. Yes, they go there: Lloyd must have been short a mortgage payment, for the death of his character, the local mayor, must be among the most undignified of his long career. Also in the “How the mighty have fallen,” is Doherty, playing a housewife who ends up in the shower, crimping lampreys with a pair of curling tongs.

There were quite a number of cases where I was reminded of the infamous J.P. Simon flick, Slugs; I’m not certain if that was deliberate or not, but there’s certainly the same air of lunatic stupidity, with Brooks whizzing round town as the Fish & Wildlife officer. He has to come up with a plan to lure the lampreys to a single location, where they can be fried courtesy of a convenient button in the local power plant [which appears to serve no apparent purpose except for eel-ectrification, ho-ho-ho). I’m unsure whether this is just cheap, shoddy moviemaking that’s trying very hard to be “culty” like Sharknado. But I have to admit, regardless of its intent, this was entertaining nonsense, even if it could have done with ramping up the more exploitative elements. Still, as movies on Animal Planet go, this was highly acceptable.