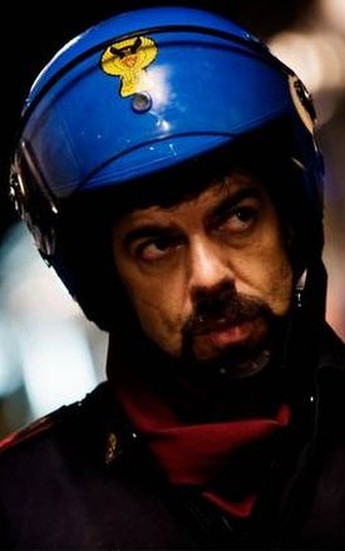 This is a fascinating piece of work, that could easily have been painted in stark tones of black and white, but instead strikes a delicate balance on the moral tightrope. The focus is on a band of Roman anti-riot cops, who have to deal with political protests, football hooligans and other criminals, which have left them with a very, very jaundiced view of the human condition. The constant threat of attack under which they operate forces Cobra (Favino) and his colleagues into a tightly-knit brotherhood which stresses loyalty to each other above all. Thrown into this group is young rookie Adriano (Diele), who only wanted to be in that wing of the police because the pay is better, and who’s embarrassed to admit to his friends what he does. Other members have family problems: one is fighting for custody of a child, another has a rebellious son who is now hanging out with skinheads. After there’s a stabbing during one incident, Cobra vows to track down those responsible and make them pay. Except, even there, it’s not as simple as it seems.

I found myself twisted and turned all over the place here by the actions of these cops, which blur the lines between what is legal, moral, ethical and right. And those are, as the film, clearly demonstrates, often only loosely-overlapping concepts. The picture drawn is of a murky world where violence is not just an answer, it’s often the only answer. There’s defiant lack of political correctness which is amazingly refreshing: immigrants are perceived as being almost entirely problematic, yet one of the cops is married to a black woman, and they have to defend a gypsy encampment from hostile locals, which they do with resolve. It’s incredibly messy, pointing out how the cops are like the skinheads they detest in some ways – yet radically different in others, and is completely engrossing, even if some of the “riots” are less than convincing [I’ve been in a couple myself: nothing concentrates the mind quite like being charged by police horses…]. Led by Favino, the performances are great, building well-rounded characters who are forged into the brutal shape they are by everyday necessity and a strong will to survive. It’s a very eye-opening look at life on the ground, where the pointy end of law-enforcement meets those who’d challenge its power.