Initially, I wondered how we had managed to miss this, with a stellar cast, including many of our favourites. As well as Pegg, there’s Eddie Izzard, Joanna Lumley and even all the surviving members of Monty Python. But after having watched it… Yeah. I can see how it slid by. Despite the best efforts of the players, it fails to deliver on the potential. The Pythons give voice to the members of an alien race which stumbles across the Voyager probe and puts Earth to a test, to see whether they are fit to join the rest of the galaxy. They give one randomly selected Earthling the power to make, as the title says, absolutely anything happen. If they use this for good, it’s welcome, Earthlings. If not, then the entire planet will be destroyed. 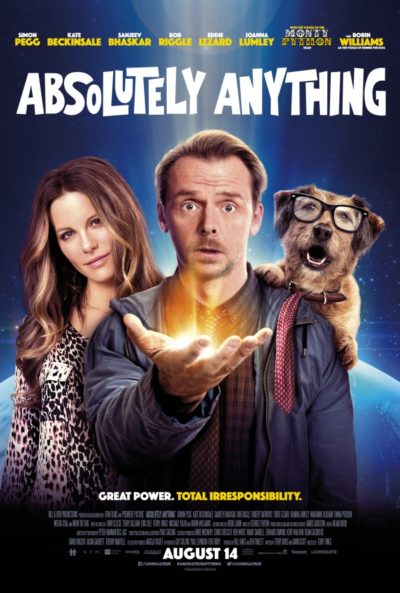 After almost giving ultimate power to Sarah Palin – a joke surely seven years too late, even when this came out – the wheel of fortune lands on Neil Clarke (Pegg), a teacher and wannabe novelist, who pines for attractive neighbour, Catherine (Beckinsale). But she is pursued by arrogant and obnoxious Yank Grant Kotchev (Riggle). Surely, with his new-found abilities, Neil will be able to make all his dreams come true. Naturally, the literal way in which his wishes are enacted poses problems; and then there’s the entire moral issue. While he could simply declare that Catherine will fall in love with him, is artificially compelled love a good substitute for the real thing? And what happens when Grant discovers Neil’s powers, and compels him to enact the American’s wishes instead?

There are bits that work really well. John Cleese is perfect as the alien leader, and there are times when the script approaches Douglas Adams-like levels of surreal logic. However, there are rather more where it doesn’t. The picture, top, is a better summary of the approach here. Much of the time, I would not have been surprised had the Colonel from Monty Python stormed in, and started complaining about it being “too silly”. And I’d have to admit, he would have a point. The “absolutely anything” promised by the title, eventually ends up degenerating into little more than policemen wearing pink uniforms, and a cult of personality surrounding colleague Ray (Bhaskar), after Neil enables a request that Ray’s crush “worships” him.

The cast gamely keep plugging away, and this is the kind of sympathetic everyman role for which Pegg was made. Izzard is great as his headmaster, and so is Lumley, playing an entirely toxic television presenter. Both are sadly underused, ignored in favor of Robin Williams pulling his “genie from Aladdin” shtick yet again, as Neil’s dog. There is a good idea at the core here, though anybody who played Dungeons & Dragons will already be well aware of the perils inherent in wishes. It just needs a much subtler touch on a script that rarely goes past the most bleedin’ of obviousness.