Wikipedia calls this a “horror comedy”, which seems… a bit questionable. I don’t think I even smiled once, and by certain accounts, it appears the horror was mostly experienced by those who had the misfortune to work on the movie. It’s probably also quite telling that I found the article about the making of the film, rather more interesting than Condemned itself. One problem is likely that the film is populated by entirely repellent characters whom I found impossible to like. 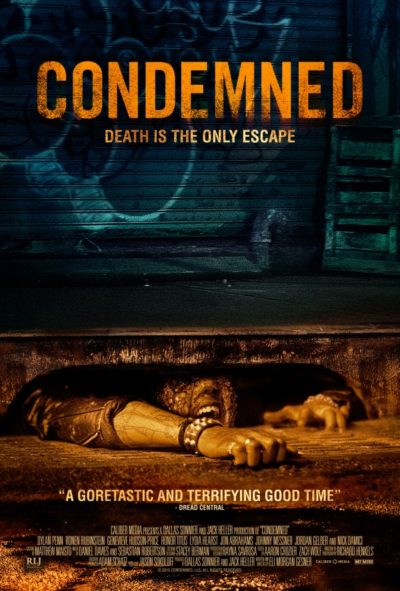 Lead Maya (Penn – Sean’s daughter with Robin Wright) bails out of her rich-girl lifestyle to hang out with her boyfriend, Dante (Rubinstein). However, she starts to have regrets about the decision as soon as she arrives at the dilapidated apartment block in which he is squatting with his pals. They’re not alone, with the rest of the residents a thoroughly motley crew of junkies and pushers, trans whores and S/M Nazis, all trying to stay below the radar of the authorities. I say we take off and nuke the entire site from orbit. It’s the only way to be sure…

Worse is to follow, for the condition of the building and the actions of its inhabitants prove an ideal Petri dish for an even more unpleasant infection to brew out of the mix of toxic chemicals, drug residue and poor sanitation. This disease causes its victims to behave aggressively – read, more aggressively – in addition to… Well, the word “oozing” is probably the most appropriate one to use here. With the doors to the outside world locked up, Maya and Dante have to try and fend off attacks, while looking for a way off the premises.

In its grungy, New York aesthetics, this feels like Gesner was shooting up on the films of Frank Henenlotter, and I also suspect that Street Trash was a significant influence, along with the bottom end of the Troma pool. However, it appears he absorbed only the surface aesthetic. Based on this, there seems to be no appreciation that the exploitation films which work, do so because of characters and story, just as much as low-budget excess. There’s no shortage of the latter, that’s for sure, with blood, pus, vomit and intestines being lobbed about with undeniable enthusiasm by FX artist Brian Spears once the epidemic gets going.

It’s just that I’d mentally checked out by that point, having found nothing here about which I could care. Beyond the effects, the creativity does not extend much more than the double meaning of the title, which could refer either to the building, or Maya. And calling her boyfriend Dante – as in his inferno – is eye-rollingly bad. Gesner is apparently a skateboarder. Must be nice that this qualified him to be given half a million bucks to write and direct a feature, with no apparent narrative experience. But I think the results here show that the ability to do an ollie does not necessarily translate into quality cinema. Who knew?