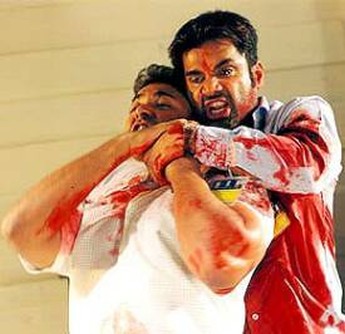 This was my first exposure to Bollywood, and have to say, I was favourably impressed. It takes inspiration from some surprising sources, adds plenty of local flavour, some impressively-staged action and comes up ahead of the great majority of films produced by Hollywood. It’s clearly not aimed at a Western audience, so you have to be prepared to hit the ground running. But slack must given to any film that opens with a quote from Vince Lombardi, steals a fight almost directly from Equilibrium, and even recycles the infamous post-Brighton IRA quote, “You have to be lucky all the time; we have to be lucky only once.”

It takes place in Bombay, a city ruled by an unholy alliance of a Cabinet minister, a judge, a businessman (Shroff) and a gangster (Khan), against whom the forces of law can do little. But the catalyst for change arrives, in the shape of policeman Hari Parnaik (Kumar), who is transferred to the city. He and his new colleagues realise they can bring everything down, after a contract killing gives them a way in. Their approach is a bit of an eyeopener in a couple of ways; corruption is a fact of life, while the tactics of one cop in particular make Dirty Harry look like a member of the ACLU. 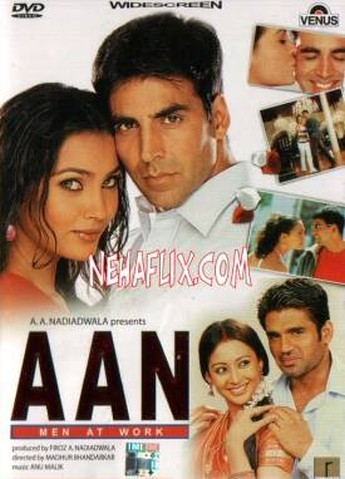 It’s undeniably Indian: no sex, not even any kissing, and the language barely reaches PG [when someone says “bastards” in English, it gets silenced and the subtitles read “rascals”!], but the quantity and gushiness of the blood squibs send the film deep into R-rating. John Woo would be proud, not least because Parnaik’s entrance is preceded by a white dove, flying in slow motion. Naturally, there are songs, but most are worked smoothly into the film (as a stage show at a nightclub, for example) leaving only one romantic number that seems out of place to Western eyes. Mind you, equally dispensable are all the female characters; this is macho to an extreme degree, and lives up to the title (“Aan” means “pride”).

At not far short of three hours, it could certainly lose a chunk without much impact, and the basic plot isn’t anything new. Perhaps the original setting or the unexpectedly polished and sophisticated execution lifted this up in our estimation, but we’ll certainly be looking out for similar genre entries from Bollywood, in the hope that their quality is equally impressive.