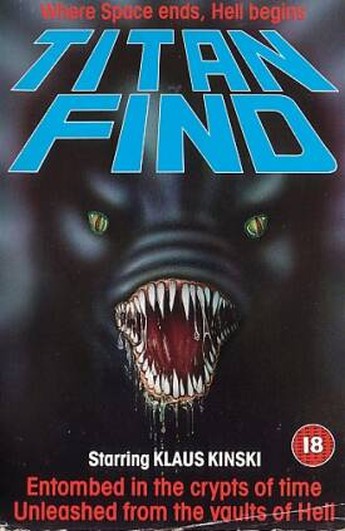 Squatting uncomfortably in form and style between Alien and The Thing, this really goes only to prove how much directorial skill those two, far superior movies possess. After an initial expedition goes horribly wrong, a new mission is sent to Titan by an industrial corporation, to stake claim to a 200,000 year-old site. But a rival company has got there first, and met a similar fate – except for the sole survivor, who is played by Kinski, which should be enough to set warning bells off in anyone’s head. When their craft is damaged on landing, it becomes a desperate race against time to get off the satellite while they’re still alive.

Despite its futuristic setting, the hairstyles firmly nail this in the mid-80’s, and Kinski is more or less the only survivor from an acting sense, too – he leaves the rest of the cast in the dust, though his role here is disappointingly small. His off-the-wall performance indicates either a fine grasp of his character, wilful and reckless disregard for the director, or simple insanity, and each would seem equally plausible. When he’s onscreen, the film comes alive; when he’s not, it dies on its feet. The concept of the monster taking control of people, and using them to lure more victims, is kinda cool, but is rarely used in the chilling way that it could. However, the gore helps, in particular one exploding-head scene that goes into my personal top 10 of such things, and will be fondly remembered, along with Kinski, when the rest of the film has faded from my memory.