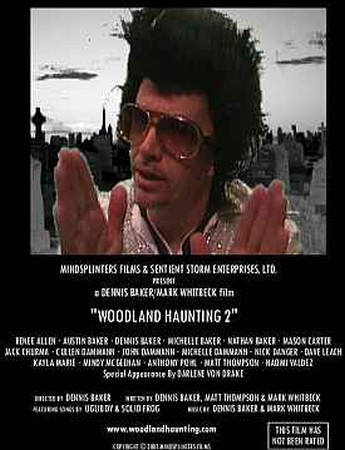 This defies criticism, since the film basically stands there and says, “Yeah, I know. I’m very cheap and crappy – wanna make something of it?” It’s the story of Denton Rose (Baker), a ghost-hunter who does an Elvis impersonation, and is called to help Shelia (sic) Baker (Von Drake), after her siblings are gobbled-up by another dimension in her house. There is also a sasquatch and a sasquatch-hunter running around, while a badly-matted flying saucer flies through outer space occasionally. This is, utter crap in almost every department. The acting largely blows, the editing appears to have been carried out with a butter-knife, and all the other technical aspects are mediocre at best, except for the use of blue-screen, which is abysmal. But, you know what? It kept my interest better, and provided more entertainment, than many a film with actual production values and real actors.

This is – and I want to stress the point – not because it is “good” in any meaningful sense. Baker, in his producer’s role, has squeezed absolutely every penny of production value out of the film’s budget, and that’s worthy of praise. It takes gall to restage the best scene from The Ring, on a budget better suited to the Value Menu at McDonald’s; one can only wonder what he might do if his next film’s main source of funding was not the back of his sofa. Any work that features shots from inside both a Coke can and a jar of peanut butter – neither, for any particular purpose other than they figured out a way to do them – also deserves something. Whether that something is praise, or the suspension of Baker’s artistic license, probably depends on how much you’ve had to drink. “Not enough” is almost certainly the answer there, though I can’t find it in my heart to despise this mongoloid instance of shot-on-video horror-comedy to the extent it likely deserves.