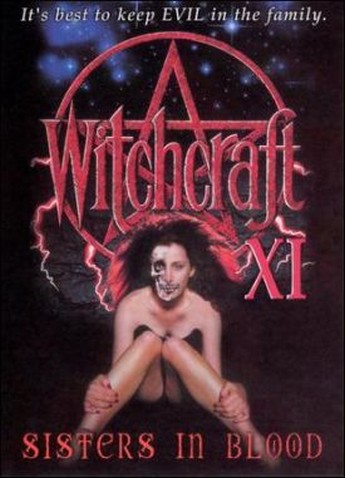 As in a previous entry, this one completely ignores its predecessor, going back to California without mentioning the apocalyptic disaster of part X. This time, it’s three college students, who are playing the part of witches in Macbeth, ahem, “the Scottish play.” To get into the spirit, they carry out a midnight ritual in a graveyard, but turns out, the spirit gets into them instead, with one (Lawrence) actively engaged in a plot to provide “vessels” for the Three Sisters, witches who were stopped three hundred years ago from summoning a demon. One is quickly recruited, but the other (Odell) is more resistant. How this ties to the series is that her sister is girlfriend to Will Spanner (supposedly the same one from parts 5-9, though played by another actress, spelled differently, and apparently completely oblivious to everything that happened there), and Detectives Lutz and Garner are investigating the trail of bodies as the witches seek the Stone Key that will allow them to open a portal to hell.

There’s much that’s ludicrous here: the poverty-row production values, random musical notes which pass for a score, typos in the credits (“Dectective” appears more than once) combine to give the impression of an entirely amateur production. Most obvious with regard to the first of these, is the Halloween masks representing the witches, though just behind is the finale: if you can’t come up with anything approximating a demon rising from hell, better not write one into your script, eh? However, the film doesn’t skimp on the nudity, has an eye-gouging that’s probably the goriest moment in the entire series, and at least the three leads are all-natural, if you know what I mean, and I think you do. There’s also the bizarre presence of veteran Anita Page, who at one point was second only to Garbo in terms of fan mail, and is just about the only woman with a speaking role who keeps her top on. Since Ms. Page was approaching 90 at the time of filming, there’s something for which to be thankful.

For all its flaws – and I could go into these at some detail, for about the next two hours – I was actually entertained, albeit more at the film, than by it, if you see the difference. As noted in my original review (to which I refer you for additional gems of dialogue and facial hair), the plot has some potential, and in the right hands, could have been a small cult gem. Those hands, however, are not Ford’s, and the results here are closer to Incredibly Bad territory, though without the necessary loopy invention, which made its predecessor such an undisguised hit in that area.