Narwhal fans are not exactly well-served by the cinema. As in most of culture, it’s damn dolphins that get all the coverage, going back to the 1916 silent film, The Fate of the Dolphin. Since then, we’ve had Flipper, Day of the Dolphin and even Touched by a Bleedin’ Dolphin. In contrast, the most well-known cinematic moment for the poor narwhals, is a ten-second cameo in Elf. But this 1989 film, while less renowned, contains significantlyl more tusky goodness – though it takes its time getting there. We were drawn in by a two-line synopsis that mentioned two of our favourite things: narwhals, and mobs of villagers. However, that really only occupies a small part of the film, albeit the climactic moments.

It’s set around World War I on the Scilly Isles, off the coast of Cornwall, on an island where the inhabitants largely survive by scavenging from whatever the sea throws up on the beach. Two children, Daniel and Gracie (Rennie and Pearce), befriend a reclusive old man (Scofield), whom the rest of the local treat with a mix of fear, suspicion and derision, because of his trips to the cursed, now-deserted nearby islet of Samson. He’s known as “The Birdman”, because he carves exquisite birds out of driftwood. That’s what attracts Daniel, who wants to learn the art partly as an escape valve from his abusive father. Gracie has no father at all, since he went off to join the navy, so she’s being brought up by her struggling mother (Mirren). 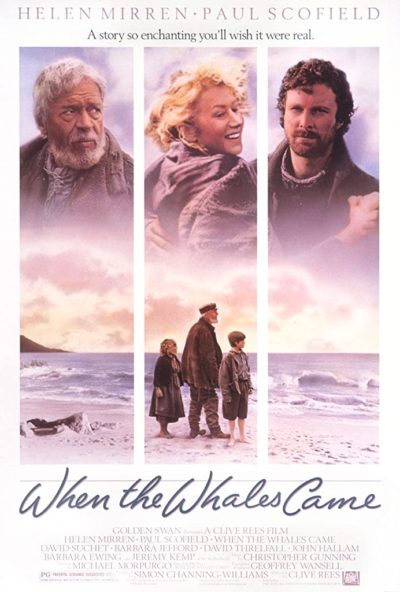 An ill-fated fishing expedition by the kids lands them on Samson, where they find a narwhal tusk over the fireplace in one of the abandoned houses. Back on their own land, they find some locals suspect the Birdman of being a German spy, because of the beacon fires he sets, and set out to make him pay. However, he is more pre-occupied with a narwhal which has beached itself on the shore, and tells Gracie and Daniel it must be returned to the sea, before it brings the rest of its pod ashore behind it – an act that would bring doom to this island, as it did to Samson. Which is where the mob of villagers comes in…

In the interests of accuracy, it should be noted that, I believe, narwhals are very rarely stranded on the British coast [only four instances have been recorded since the days of Good Queen Bess], so the concept here is probably, ah, on thin ice, zoologically-speaking. Though the massacre of narwhals in large numbers, sadly, still goes on: late last year, up in Canada, at least 600 were killed by locals after getting hemmed in by ice. I’d be more inclined to take claims of this being a native tradition seriously, if snowmobiles and semi-automatic weapons weren’t apparently involved, and the media kept away. Happy to use the tools of modern civilization; not so willing to leave your questionable “harvests” behind, or face public opinion when the world sees what’s going on.

Back to the film. It’s an idea that works very nicely, both as a metaphor for the war – we note the prominence given to a narwhalesque spiked German helmet in the local school – and as a reverential acknowledgment that narwhals have a mystical quality, perhaps more so than any other aquatic mammal. The movie is certainly helped by a strong performance from Scofield, and very natural ones by the two children, against a marvelously scenic backdrop. The pace is relaxed, to say the least – those, like us, lured in with the promise of narwhals, will likely find themselves looking at their watches. But as an unhurried, Sunday morning kind of a film, it certainly has some charm.