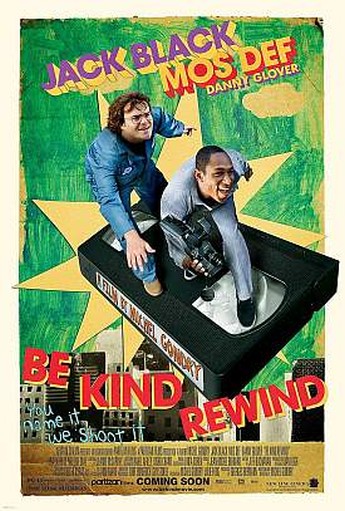 If you’ve seen the trailer, you’ll know the basic premise: crappy video store, renting only VHS tapes, has its stock magnetically wiped. Manager Mike (Def) and his paranoid sidekick Jeff (Black) decide to replace the cassettes by making their own versions of films – everything from Ghostbusters to Driving Miss Daisy – only to find them proving rather more popular than the originals. However, Gondry has actually made something which is closer to a self-indulgent love poem to himself and other ‘indie’ film-makers, with a totally unreal view of urban life. It could be argued, he also insults the intelligence of the tapes’ viewers, by claiming they wouldn’t notice, or at best should prefer, the zero-budget, extremely amateur fakes churned out by Mike and Jeff. In addition, too much of it is concerned with an extremely uninteresting subplot involving Fats Waller, because the owner of the block (Glover) is convinced Waller was born in the building.

By far the most amusing sections are the efforts by the duo to imitate the films: their method of doing ‘day for night’ shooting had me laughing like a drain at its insane brilliance. However, there isn’t as much of this as you’d think from the trailer, and the script instead lurches from one questionable element to another: I never thought I’d feel as much sympathy for big Hollywood studios as Gondry makes me feel. They send their representatives to raid the video-store, putting an end to the remakes, and frankly, I can see their point, since it’s no longer art, but has become a full-on business by that point. The neighbourhood then pulls together miraculously for the final act, in a manner that’s completely implausible, especially in 21st-century New Jersey. You sense the director is going for some kind of Capra-esque fairy story, in which the little people triumph over greedy big business. It doesn’t work.