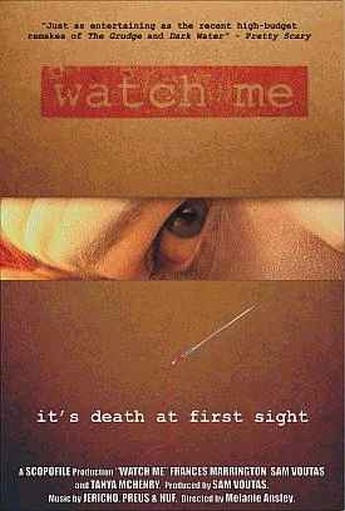 Spam. We all get it. We all hate it. But it’s not usually lethal. However, this Australian film is about one attachment that is more than an annoyance. It’s called “Watch Me”, and if you do as it says, you’ll encounter a red-headed woman in a yellow dress, then end up dead, with your eyes sewn shut, before the email forwards itself to everyone in your address book. Tess (Marrington) stumbles across it, as part of a college project – but as her friends end up brutally murdered after opening the message, she must team up with a trafficker in underground films, Taku (Voutas), to find the secret behind the attachment, and stop its progress. At first, we were mocking this one as “The Gring”, for it seemed little more than a hodge-podge of ideas lifted from Japanese horror films. But the more it went on, the more we realised we were actually enjoying it, regardless of the apparent lack of originality.

A big plus is Ansley’s nice visual sense, that adds significantly to the tension as things progress. It’s not a long film – less than 80 minutes – so of necessity, the story is established quickly, and things then unfold at a solid pace. The score is also worth noting, the mix of piano and harsher electronics certainly proving atmospheric. Marrington’s performance in the central role is decent, rather than spectacular, and Voutas probably has the more interesting character; while, initially, Taku seems little more than a degenerate slime-ball, by the end he’s become much more sympathetic. By the end, we’d discarded all sarcasm and were simply enjoying the well-written, creepy tale. We’ll let Ansley off with a light tap on the wrist, providing she promises to do something original next time. If so, we certainly look forward to seeing it.