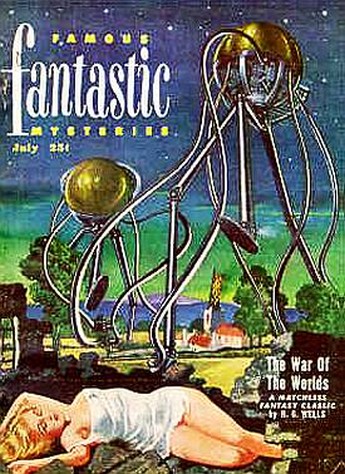 HG Wells wrote War of the Worlds in 1898, only a few years after Italian astronomer Giovanni Schiaparelli reported seeing canals on Mars. And while much science-fiction of the era has now been consigned (largely, rightfully) to the dustbin of literature, Wells’ story continues to exercise a powerful pull on the imagination, even in the 21st century. It’s a simple tale of – and I trust I’m not giving anything away – an alien force which humanity is powerless to stop, halted in its tracks by the smallest lifeforms Earth has to offer.

The story seems to appeal particularly during times of political uncertainty – Orson Welles’ radio show aired on Halloween 1938, when war was looming on the horizon. The 1950’s cinema version played on Cold War fears, with the Red Planet being none-too-subtly equated with the Red Menace. The Viking missions in the mid-1970’s saw a revival of interest; while a version of Wells’ tale scripted by Anthony Burgess never reached production, I still have a soft spot for Jeff Wayne’s musical, which remains a classic concept double-album. Since then, however, movie theatres have largely been safe from the Martian menace, reduced to jokey spoofs like Tim Burton’s Mars Attacks!.

But with the Mars Rover rambling slowly around the planet, and America once more at war, it’s perhaps inevitable that June 2005 sees multiple versions of the story released. Of course, you know about the Cruise/Spielberg version – however, with daring audacity, worthy of cinematic hustlers from an earlier age, the Asylum are riding the tidal-wave of publicity generated by Dreamworks. They released their own version, helmed by David Michael Latt, the day before the blockbuster hit the screen. And, thanks to the beauty of War being public domain, there’s not a single thing Dreamworks can do about it. 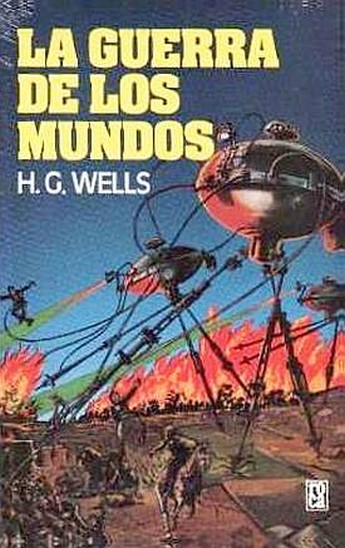 Truth be told, despite its kicking central concept, the book really isn’t that cinematic: the narrator does little except observe the collapse of civilization as he wanders around, without experiencing much of a character arc. Of course, neither has he any hand in the final resolution of the problem, which is hardly standard behaviour for a Hollywood hero. Oh, plus the book takes place in…shudder…England. And Victorian England at that.

So changes are probably inevitable, though I confess to raising an eyebrow at the similarity in the approaches. Both take place in East-coast USA, neither claim Mars as a source for the invaders (presumably in a nod to a century of scientific progress), and both also have a family parting under strained circumstances, shortly before events kick into action – this leaves the hero to struggle through the resulting chaos, trying to be reunited with his relatives. One key difference: in Spielberg’s version, Cruise has the children to protect; in Latt’s, the son goes off to Washington with the mother.

Let’s take a look at the two versions. I hope this won’t produce nightmares; if it does, just remind yourself that the chances of anything coming from Mars, are a million to one…

[Images from Dr Zeus’s comprehensive (178 to date) collection of War of the Worlds book covers. A third version, Timothy Hines’ H.G. Wells’ The War of the Worlds is also out, but was unavailable at time of writing. Maybe later. Or, having now found some reviews, maybe not…] 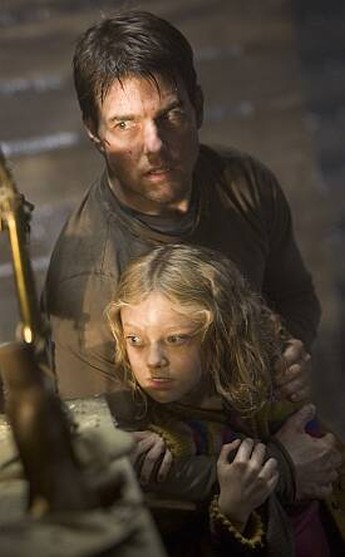 The biggest director on the planet. The biggest star on the planet. Doing SF. No doubt this is going to be spectacular, dimmed only slightly by the fact that we’ve seen Steven direct Tom, running terrified, before – in Minority Report, right down to both having a scene where Cruise freezes, so as not to be found by mechanical search devices. However, this is much larger in scale, and the word “epic” doesn’t even begin to cover it. Not to say it doesn’t have flaws, some of them major; it’s just that they largely won’t be apparent while you’re sitting slackjawed in front of the screen, gawping at the sights laid out before you.

The first problem is Cruise, whose stardom is now such that it overshadows any role he plays. The concept of him as a blue-collar dock worker is so ludicrous, it’s a good thing the film doesn’t dwell on it. And, since you never forget he’s as well-known as Jesus Christ, there’s no real threat – you know they’re not going to kill him. Then, there are the kids: one teenage brat (Chatwin), one adorable (Fanning). At least, she starts off that way; from about 1/3 through, she switches to a strict rotation of high-pitched fear and catatonia that rapidly wears thin. But, really: you don’t go to see a film called War of the Worlds for character development. You go to see things – and people – getting blasted, and the film delivers in spades here. From the moment the first cracks appear in the earth [these invaders’ machines have been parked underground], the hits just keep on coming, executed by a master with $200m to spend. After a pair of, frankly, wussy alien movies in ET and Close Encounters, it’s great to see Spielberg get with the program and deliver the bacon.

As long as he stays away from dwelling on Cruise too much (Look! He’s the star!), Spielberg also manages to keep hold of the tragedy; shots of ash-covered survivors and clothing floating down from the sky are disturbingly reminiscent of 9/11. And perhaps the most chilling sequence is where a mob strip our hero from his car. Man’s inhumanity to man is about as bad as the alien heat-ray, and it makes for a surprisingly downbeat experience, with rays of hope few and far between. Nods to previous versions: the grandparents are played by the stars of the 1953 film, while Robbins’ survivalist is named Ogilvy, after the astronomer in Wells’ novel. 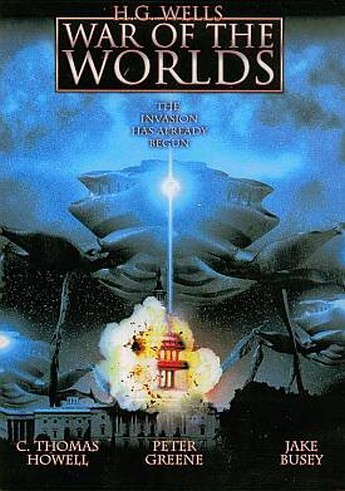 Watching this immediately after the Spielberg one – and I mean, immediately – I was braced with low expectations, beyond the Independence Day ripoff cover. This cost perhaps 1% of the money spent on the Cruise missile, so how could it possibly compete? Wisely, perhaps, it largely doesn’t try: oh, sure, it’s got heat-rays and alien machines. But this is a philosophical, thoughtful version; yes, this bogs down at times, yet it’s clear the script has had more attention put into it. For example, the ending, abrupt elsewhere, is nicely foreshadowed here, with even an interesting hint that the aliens’ fatal illness might not have been entirely natural.

Howell, who worked with Spielberg in ET and Cruise in The Outsiders, is surprisingly impressive and much more credible than Cruise as an “everyman”, though the point of making him an astronomer is never clear. He heads to Washington to try to link up with his wife – we get more breast in the opening scene than all of Spielberg’s story! – and son, played on screen by Howell’s real life son. On the way, he hooks up with a priest (Giles), who is finding it hard to keep the faith as things collapse, and encounters a soldier whose sanity drifts from questionable to absent – that’s Busey, natch.

Our hero and the priest are trapped in a basement, which is where the film does grind, with dialogue that largely belabors any points being made. I confess my attention was sorely taxed, the longer these scenes went on. But for every such moment, another had dramatic impact to match its big-budget brother. In an interesting stylistic choice, Latt changes the tripods into something that looks more like a giant bug, with six legs. They look credible enough, but the heat-ray is pretty cheesy, in comparison to some impressively blasted landscapes. Given the budget, it’s simply an feat that the FX don’t suck – and overall, this has to go down as one of the better direct-to-video movies I’ve seen.

Nod to previous version: Howell’s character is called George Herbert, a neat reversal of H.G.Wells’ first names. And this was originally called Invasion – according to one report, the title was supposedly changed before filming started. Except in the behind-the-scenes footage on the DVD, they still seem to be using Invasion on the clapperboards. Hmmm…