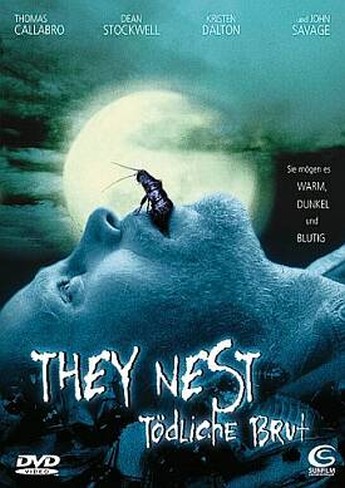 Cockroaches are icky. While undoubtedly a true statement, that’s pretty much all this film has to offer – even though the roaches here are African killer ones, that eat you from the inside out. They land on an island off the coast of Maine, where alcoholic doctor Ben Cahill (Calabro) is taking an enforced vacation, much to the chagrin of the local (John Savage) whose house he bought after its repossession. When said local turns up dead, Ben becomes the chief suspect; can he convince the local sherriff (Stockwell) it’s really flesh-eating bugs to blame?

As you’ll imagine from that brief synopsis, there are enough holes here to drive an entire entomology department through. Not least the finale, where the method of defeating the creatures is more suited to an overdue creative writing assignment turned in by a somewhat-backward fifth grader. Elkayem would later go on to the much-better Eight-Legged Freaks, and occasionally brings some of the same wit or energy to proceedings here. There are a couple of sequences – a hamster in a maze, and a barn with a basement – that work fairly well, but Calabro is a bland hero, whose problems (divorce, booze) seem no more than nods in place of actual characterization. It’ll likely provoke the odd squirm of disgust, but it never goes far beyond that; discovering it was originally made-for-TV came as little shock.