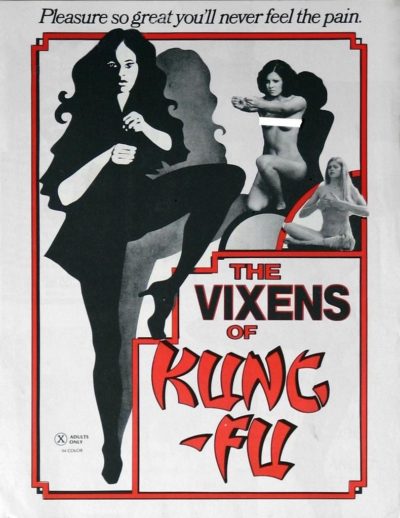 It begins with a prostitute (Anthony) going for a random walk in the woods, when she is shot with a “gun of anaesthesia” and gang-raped by three men, including porn legend Jamie Gillis. The film seems to be going for a creepy, David Hess in Last House on the Left vibe here. The attempt is completely undone by the jaunty bluegrass music accompanying the assault. Our heroine randomly teleports afterward to a beach, where she is found by a passing kung-fu mistress (Laing). After some lesbian sex, she joins the class, which appears to specialize in making fog appear from… orifices not normally associated with such things. It’s likely the sole moment of note in the entire film, and certainly puts the question “Do you smoke after sex?” in a whole new light. [NSFW GIF]

Also roaming the forest is a random monk (Richards), who meets and is defeated by the women, His punishment, in true Castle Anthrax style, is to have sex with the whole class. Despite the presence of unexpected Tubular Bells on the soundtrack here, his performance is found sadly wanting. Proclaims their teacher: “This man is good-looking, but not tough enough for lovemaking. Take him to the wild forest and feed him to the wolves!” Rough crowd. It appears the monk is able to escape that fate, instead ending up at the House of Wong restaurant in a suburban strip-mall. There, another martial-arts mistress (Jong) is working as a cook, turning her skills in the form of “Golden Dragon Raising Head” kung-fu towards making particularly tasty orange peel beef.

The film takes a sharp twist in story here. What was looking like the heroine learning skills to avenge her assault, now becomes martial arts plot #3: the hero learning new skills to defeat those who bested him. This results in one final sex scene, between the two of them, which appears to result in a no-score draw. For it is followed by a confrontation between their two mistresses, who jump-kick towards each other and… fade to black. I haven’t been more disappointed by the ending of a film since My Wife is Gangster II. Though “disappointment” would here imply any moment in this, at which there was some appointing to begin with. That isn’t the case. If you’re looking for an entertaining combination of sex and violence, turn your gaze elsewhere, for movies which strike a better balance, such as Naked Killer.