After an unexpectedly decent performance in the ratings for Locusts, and a younger-skewing demographic, a sequel was quickly green-lit. Though its production was not without problems. Shooting for the film in New Orleans was wrecked by Hurricane Katrina, which left Lawless having to flee the city – an experience which helped make her a climate-change activist. The final week had to be relocated to Nova Scotia as a result – and you can tell. For example, the cemetery you see in the opening scene, is not the traditional New Orleans one with the raised tombs as originally planned, but the standard Canadian variety. Other locations seen in the film were simply wiped out by the hurricane. 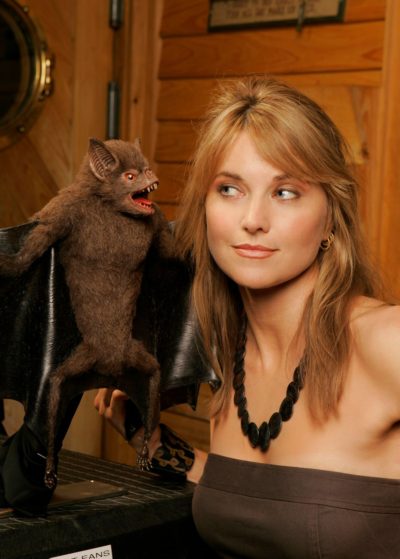 For this viewer, more of a problem was an apparent pandering to that younger demographic, such as a lengthy opening sequence in which college kids have a party. Excuse me, can we fast forward to the animal savagery? There is way too much of that kind of thing throughout the entire film, and not nearly enough of them dying, terrified and alone. The excuse is that both Maggie Rierdon (Lawless) and her boyfriend Dan Dryer (Neal) are now lecturers at a New Orleans college, rather than a civil servant as Rierdon was in Locusts. This one is also set up as more of a mystery. While we knew the origins of the locusts from the beginning in the first movie, things begin here with a series of unexplained deaths in which the victims are drained of blood. However, there really is little or no suspense about the cause, given the film is called Vampire Bats.

Rierdon shoe-horns herself into the investigation after a couple of her students are accused of the first murder; nice that the police let a college lecturer interview murder suspects in custody. When the truth comes out, it’s right in her wheel-house, and at least here, the animals in question are more of a threat. The attacks are quite well-staged, using a mix of animatronics (for the close-ups) and CGI (when they’re flocking), with a surprising amount of gnawing. The best is a pair of simultaneous assaults, on a faculty cocktail evening and a student rave. Though we were distracted by the remarkably high production values at the latter, especially considering it takes place in a steam tunnel and charges attendees only $10, including all they can drink of ecstasy-laced punch. Sadly, we never got to see a third Rierdon film, exploring the topic of financial management at underground collegiate parties.

There’s a particularly ecological bent here, with the cause being illegal waste dumping into water, which makes its way up the food chain into the bats. But even though it ends with a similarly questionable solution as Locusts, it lacks the loopy insanity which made that such an unexpected guilty pleasure. There’s an earnest quality here, which is at odds with the material, and makes for a less entertaining experience. Though I was amused to discover that bats apparently have about as much of a tolerance for shitty rave music as I do.