TIL about the “Marocchinate”. Which, Wikipedia tells me, is “a term applied to women who were victims of the mass rape and killings committed during World War II after the Battle of Monte Cassino in Italy. These were committed mainly by the Moroccan Goumiers, colonial troops of the French Expeditionary Corps.” Those were, in case it’s not clear, on the Allied side. They were supposed to be the good guys, folks. It’s an encounter with them which forms the emotional core of this film, depicting the struggle for survival of Cesira (Loren), a store-owner from Rome, and her 12-year-old daughter, Rosetta (Brown), over the final months of World War II. 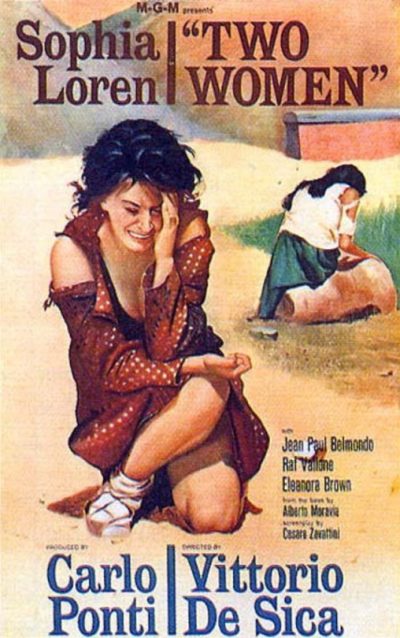 After their store is bombed, Cesira opts to leave with Rosetta and return to her family home in Ciociaria. It’s a rural province she perceives as safer, being less likely to be the subject of indiscriminate attack, although still under Axis control. There, they are given a warm welcome and shelter, and meet Michele (Belmondo), an intellectual strongly opposed to Mussolini’s regime, who becomes a father figure to Rosetta. The area, however, is not entirely immune from the effects of the ongoing conflict; Michele is conscripted by a platoon of Nazi soldiers, and forced to act as their mountain guide. Believing Rome now to be safe after its liberation, mother and daughter head back toward the capital. Which is where they encounter the Goumiers…

It’s perhaps the first time I’ve seen Loren in a film where she has to produce significant acting, rather than being mostly an attractive clothes-horse. She certainly delivers, and it’s entirely legit that her performance became the first in a foreign language to win an Oscar [the only other Best Actress recipient to date is Marion Cotillard, in 2007 for La Vie En Rose]. However, the main problem is Sophia’s age. While likely coming across on screen as somewhat older, she was still only 25 when she made this. Loren was originally cast in the role of the daughter, and it’s a considerable stretch to accept her as having a child on the edge of becoming a teenager. On the other hand, this approach, with the extreme youth for its casualty of war, does pack considerably more of a wallop – which if anything has likely been exacerbated by the passage of time.

The harsh contrast with what has come before is likely also part of the power, since for large stretches, it feels more like an occasionally plodding pastoral romance. It’s easy to forget there’s a vicious and brutal struggle taking place, just on the other side of the hill, and the residents here mostly seem entirely happy to ignore it where possible. But every so often, De Sica drops in a reminder to the audience, and stays remarkably even-handed here: in war, there may be no atheists, but there are also only shades of grey. Given this was made less than a generation removed from the events it depicts, it’s certainly courageous to paint, at least a section of the winners in such an unflattering light.