Suggestion to movie-makers. If you’re going to set your story in Shetland, film it in Shetland. Or, conversely, if you’re going to film mostly in Ireland, set your story there. For I’ve never even been to Shetland, and I was still thoroughly unconvinced by this attempt to make the rolling hills of the Emerald Isle look like the northernmost outcrop of the United Kingdom. There’s not even much reason for the setting to be Shetland, beyond it being an adaptation of a book where this was the case. The loony religious cult at its core could be present in any moderately remote European location. 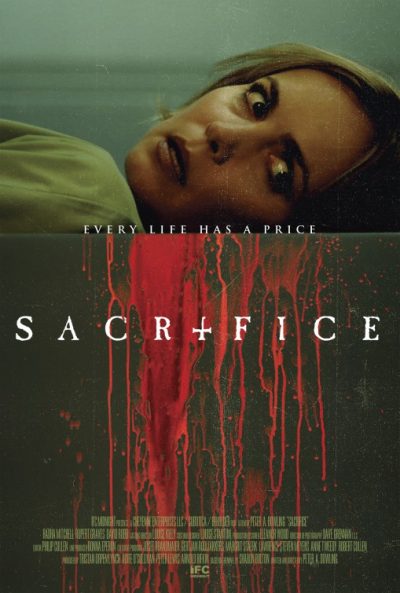 Crossing its path is obstetrician Dr. Tora Hamilton (Mitchell), who suffers a miscarriage and moves with her husband, Duncan (Graves) to Shetland where they are going to foster a child. There’s a 12-month waiting period, so they have to hang around: his father, Richard Guthrie (Robb) sorts them out with a house and employment in the meantime. But while pottering around in their yard with a backhoe [don’t ask…], Tora comes across the body of a woman, buried in the peat. She has mystic runes carved in her back, was pregnant shortly before death, and the cause of her demise was having her heart ripped out. With local cops, under Detective Inspector McKie (McElhinney) apparently unwilling to investigate, it’s up to Tora. Only, she’s going to find out precisely why the police are so reluctant.

This is one of those movies which sounded promising and, indeed, started off that way. However, the further on it goes, and as dubious story element is piled atop of dubious story element, the cringe factor here becomes increasingly painful. At the end, I had to turn to Chris and say those four little words which mean so much: “I can only apologize.” As you might have guessed from the above paragraph, the most obvious inspiration is The Wicker Man, but it comes closer in execution to the Nicolas Cage version than the Edward Woodward original. There’s more than a hint of Rosemary’s Baby too – and similarly, we’re talking Zoe Saldana, not Mia Farrow.

Dowling’s ham-handed direction feels it essential to foreshadow virtually every future development. To illustrate, here’s just one example. When Tora visits her husband’s parents, her mother-in-law locks Richard’s study and portentously hangs the keys on a wall-board, which gets its own close-up. It would only be marginally less subtle if she had yelled, “Pay attention!” while doing it. If the cast in general isn’t bad, there’s only so much they can do with such obvious and poorly-considered material. The most interesting question that arises, is whether the source material lost something in transition to the screen, or if the novel in question was just as badly written.

The list of decent horror films set in Scotland is a short one, likely topped by the previously-mentioned Wicker Man. It’s certainly no longer after Sacrifice.