Coming in, I wondered why we were bothering. The last entry in the series which was good, by any objective standards, might have been… Tremors 2? Since then, it had felt like a generally diminishing set of returns, apparently existing solely to keep Gross in work. I couldn’t honestly tell you what number this was in the franchise, and don’t think I even bothered to write about the last one. But by chance, we watched a documentary on the making of the original movie a couple of days ago. It reminded us why the original – now 30 years old – is still a classic, and of everything it did right. Which by and large, is everything the sequels do wrong. Would this be any different? 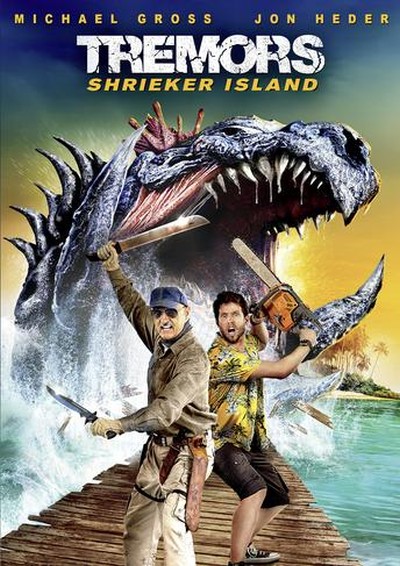 Don’t look for originality in the story – roughly equal parts Tremors, Jurassic Park and Predator. The last gets explicitly name-checked more than once (as do Rambo and The Evil Dead), and some of the audio cues are… suspiciously similar. There’s even a guy wielding a Jesse Ventura-like mini-gun, though the impact is limited, due to the poor digital FX used to represent its results. Park is apparent in the uber-wealthy guy (Brake) who has brought a quartet of graboids to a private island, and “enhanced” them (an angle which goes nowhere much) to provide a big-game hunting experience for millionaires. This goes as well as meddling with nature always does. It is up to Burt Gummer (Gross), his ex (Langrishe), the likable guy (Heder), and a Lara Croft wannabe to save the day. Meanwhile, the creatures take their cue from Enlightenment philosopher Jean-Jacques Rousseau, and eat the rich.

There seems to have been a fair bit of money spent on this, not least the location shooting in Thailand, which is well utilized. There’s good, slo-mo use of flamethrowers and if you ever wanted to see Napoleon Dynamite yelling “Suck on this!” and carving apart Shriekers with a chainsaw… Well, that’s a strange and very particular fetish, but to each their own: this movie will keep you happy. It is n improvement over the last couple of entries, simply through Jamie Kennedy not being present (his character is locked up in a Mexican jail, according to a conversation here). The ending though… Well, let’s say, I kept expecting it to go one way, and it resolutely refused to do so. Definitely the most downbeat of the franchise.

That said, it’s not necessarily a bad thing, and does set the series up for a possible future. Though whether fans will embrace the potential new direction is hard to say. I certainly didn’t hate this as an entity. Indeed, it’s likely the most entertaining one since #2, though that’s not exactly a high bar. The presence of an F-sized Graboid as a final boss adds enough variety, even if its method of dispatch is rather familiar. But let’s give the makers the benefit of the doubt, and call it a loving homage to the finale of the original film, rather than a shameless rip-off.