You can’t discuss Castle without his showmanship, and this is perhaps the best-known example. It’s likely significant that he spent $400,000 on making the movie… and $600,000 on the gimmicks which went along with it, including “Percepto!”. This illustrates his priorities, though to a savvy modern audience, it’s not that good. I went to a double-bill of this and House on Haunted Hill at the Scala which revived both gimmicks. Hill‘s flying skeleton got a round of applause, while The Tingler’s vibrating seats provoked nothing more than mild derision. But maybe it would have worked better at the time, and I can’t say Castle doesn’t go all out. That’s starts from the opening, in which the director himself comes out to set the scene for what the audience can expect:

I feel obligated to warn you that some of the sensations—some of the physical reactions which the actors on the screen will feel—will also be experienced, for the first time in motion picture history, by certain members of this audience.

That’s certainly a bold claim, and I’m not sure it’s one to which strapping electric motors to some auditorium seats can live up. Fortunately, even if you’re sitting in your own, non-enhanced chair, there’s plenty here to appreciate. It’s definitely a fresh idea. Everyone has a microscopic creature attached to their spine. The emotion of fear causes it to grow, and if no outlet (such as screaming) can be found, it can potentially prove lethal. This concept doesn’t stand up to scrutiny in the slightest. However, Price, playing pathologist and part-time researcher Dr. Warren Chapin, sells it convincingly enough you will buy into it. Everything else follows with reasonable logic, such as cinema owner Oliver Higgins (Coolidge) learning of this, and using it to kill his deaf-mute wife (Evelyn). 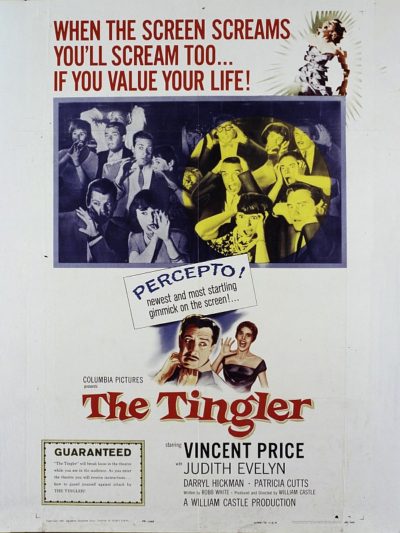 Indeed, between this and House, which came out a few months earlier, it seems that unhappy marriages were a bit of a trademark for Castle [who was apparently married quite contentedly for almost 30 years, until his own death – which did not appear to involve a spine-dwelling monster, pit of acid, etc.]. This film gives us two of them, for Dr. Chapin is wedded to Isabel (Cutts), whose wealth funds his work, but who is repulsed by her spouse, and flaunts her infidelities, in a way that can only be described as cunty. She attempts to use the tingler on him, after first dosing Warren with some LSD he carelessly left lying about – hey, it was the fifties. After this fails, somewhat disappointingly she simply exits the movie, without receiving her just deserts, unlike Higgins.

Indeed, this is certainly among the first films to portray the acid experience, eight years before Peter Fonda would go on The Trip. I can’t say it seems particularly convincing, and is more of a warning than an endorsement. Though it’s fortunate Dr. Chapin chooses to describe everything that he’s seeing, as part of the scientific record, or else I don’t know what it’d be like. Viewers may care to try turning the sound down during this sequence and figuring it out for themselves, in a round of hallucinogenic charades. Chapin also has a full X-ray machine in his basement laboratory, something which I suspect authorities these days might frown on. The same goes for Higgins, casually transporting the corpse of his wife both to and from the doctor’s. I mean, did he strap her to the roof-rack?

However, everyone goes about their tasks with complete commitment, and it’s a lot of fun, with few slack moments, perhaps save the excessive footage from 1921 silent feature Tol-Able David. It’s quite remarkably meta for the time, with the creature supposedly escaping from a movie theatre in the film, into the one screening the movie, where Dr. Chapin then exhorts the audience, “Please do not panic! But scream! Scream for your lives!” The first part of that feels more like legal obligation: I’m sure Castle, who wasn’t above hiring people to fake fainting in screenings, would have welcomed a full-blown panic as good publicity.

Price, naturally, is the glue that holds things together, though I also appreciated Evelyn’s wordless performance. The scene where she is literally frightened to death is perhaps the most memorable, helped by Castle’s brief injection of colour, in the form of blood-red water in a sink and bathtub. If the impact is diminished by the passage of sixty years and home viewing, it’s still likely the best film Castle ever made, and even without any gimmicks, remains an entertaining B-movie. 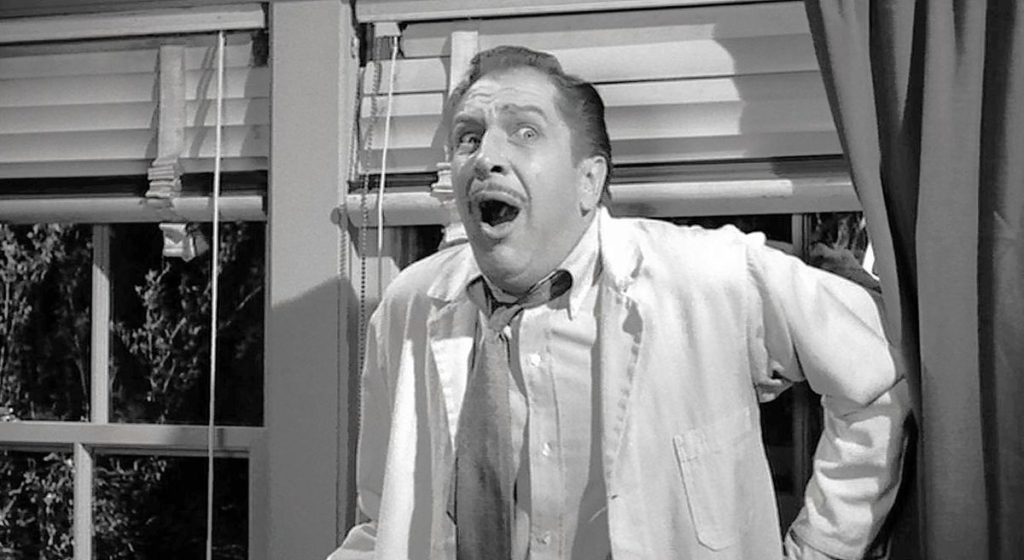 January 2004: This stands the test of time, thanks largely to Vincent Price’s fine portrayal of scientist Dr. Warren Chapin, who discovers that fear causes a creature to appear on the spine. While it is neutralised by screaming, what if the victim couldn’t? And look! Here’s the deaf-mute wife (Evelyn) of a local cinema owner (Coolidge). Just to add to the fun, Chapin’s wife (Cutts) is an alcoholic slut with murder in mind – their razor-edge bitching is almost Mamet-like. It plays with the concept of cinema, beginning with a speech by director Castle to the audience; the climax, with the “tingler” loose in a theatre, is when Percepto kicked in, giving certain seats a small buzz. Modern viewers may snigger, but imagine the effect in 1959.

It’s also way ahead in acknowledging the potential of LSD, though Vincent Price shouting “The walls! The walls!” isn’t perhaps in the sky, with diamonds. Castle’s momentary use of colour is also marvelously restrained. On the down side, I can’t imagine an era when the FX would have passed muster, and the pathological/medical procedures shown must come from a bizarre parallel universe. Chapin’s sister-in-law is also immensely annoying, passively subservient in a way unimaginable these days. We also get B-movie lesson #393: extend the running time of your film by including lengthy sequences from a public-domain silent movie. But hell, it’s still far more fun than 90% of the horror flicks made today. C+