Ladies and gentlemen and children of all ages, we’re going to present for your approval a novelty picture with an all midget cast, the first of its kind ever to be produced. I’m told that it has everything. That is, everything that a western should have. It’s a soul stirring drama, a searing saga of the sagebrush, and it’s called “The Terror of Tiny Town.”

More than seventy years have now passed since this film forged a whole new genre: the all-midget Western. And when you’ll see it, you’ll understand why it’s a field of cinema that has remained dormant for seven decades, with so many aspects which are, from a 21st-century perspective, politically incorrect to a jaw-dropping degree. Not least would be the opening title which declares the film to star “Jed Buell’s Midgets.” And there was I, thinking that the ownership of other people had been abolished in America after the Civil War. Perhaps there’s a sign somewhere in Washington which says, “You must be THIS tall to have civil rights.”

As the opening announcement quoted above says, apart from the short stature of the cast, it’s a 1930’s Western in just about every other way, with all that implies. The plot has Bat Haines (Rhodes) scheming to set two ranchers against each other in a range war, anticipating being able to clean up in the aftermath. It helps he has the sheriff in his pocket, but he reckons without the son of one, Buck Lawson (Curtis), falling for the niece of the other (Moray). But did I mention it’s also got some musical numbers? These vary from the somewhat cute to the downright creepy: I’m pretty sure the performer in the saloon is less little person, and more pre-pubescent young girl. As a result, seeing her making eyes at the miniature adult performers is probably up there with the wedding in Freaks, among the more grotesque sequence in pre-war cinema. 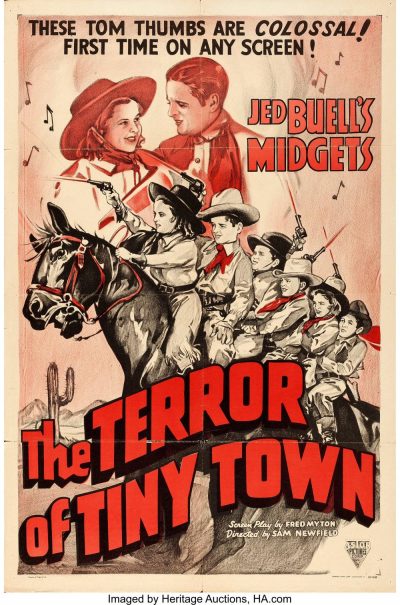 The acting is all over the place – you’d probably expect this, given that I imagine casting was almost entirely based on height, rather than actual talent. Some of the performances are not bad: Moray is decent enough as the heroine, and Nita Krebs vamps it up nicely as a dance-hall floozy. On the other hand, Joseph Herbst, playing the sheriff, delivers his lines with all the passion and intensity of someone on Valium reciting the phone book, and ‘Otto’ the comedic chef is little better. He gets upstaged by a duck walking backwards – even though the feat is obviously accomplished by running the film in reverse [this is especially apparent, as they use the same footage three times in the same scene].

Speaking of animals bring us to another essential aspect of any Western: the horses. On here, of necessity, Shetland ponies – except for the gargantuan beast shown at the blacksmith’s in the opening scene – and their little legs fair whizz along, particularly during the chase sequence. One trusts some undercranking was involved, or their already-short legs will have been worn down to bloody nubs by the end of shooting. Finally on the animal front, even though this is somewhere in the middle of the land-locked, dusty, bone-dry desert, the barber-shop has a penguin. Let me just repeat that, for fear you skimmed over it.

The barber-shop has a penguin.

This is for absolutely no reason. There is one shot of said flightless avian, and nobody mentions it, even in a “What the hell is that doing here?” kind of way. There is also a miniature barber-shop quartet, performing close harmony tunes [though I suspect lip-synching is involved], but it does at least make some sense for them to be in a barber-shop. A penguin: not so much.

One also wonders who the heck built this town. Some aspects are sized to fit the inhabitants, but it’s clear the sets are just your average Hollywood back-lot. This is most apparent in that a lot of the actors have to reach up to open the saloon swing-door, and we were perpetually holding our breath for fear one would get smacked on the back of their little heads by the return swing. Similarly the curb from the main street reaches almost to the waist of certain performers, and requires from some of them a degree of exertion better suited to Ninja Warrior. 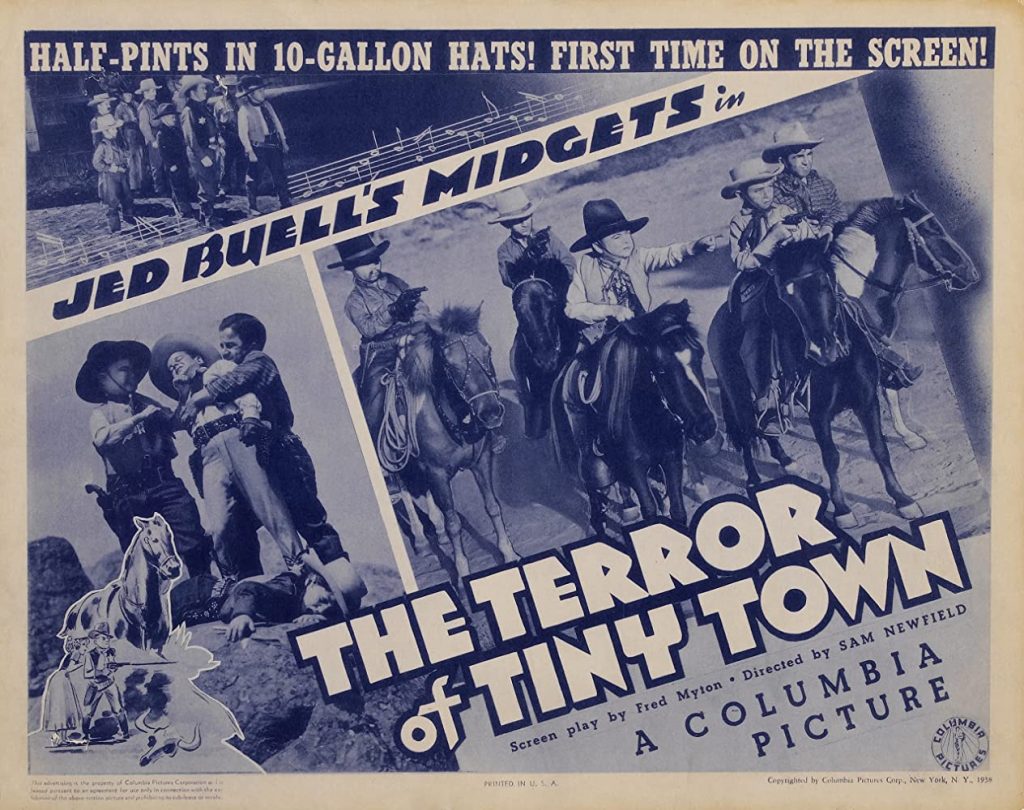 It all builds to an exciting conclusion, where Lawson and Haines go at it in a cabin fist-fight, after the fuse is lit on a bundle of dynamite. It would probably be somewhat more tense if the fuse did not apparently only burn while the camera was turned on it. But as brawls go, it’s actually by no means bad – and we speak as connoisseurs of midget mayhem – with the two trading blows and rolling around the cabin with a lot of verve and energy.

No particular surprise as to the ending, but the final five minutes are probably the best thing the movie has going for it. Even with the opening [edited out in some TV screenings], it barely runs sixty minutes. So this will hardly tax the patience of even the most limited attention span, and it probably counts more as a short film than a feature, hohoho.  Originally an indie movie, the rights were bought and the film was re-released by Columbia, though I can’t find any information on whether or not it was successful.

Jed Buell supposedly planned to use the same cast in a film version of the Paul Bunyan story, with a non-midget playing Bunyan, but nothing ever came of that. However, many of the cast would go on to much greater renown the following year, appearing as Munchkins in The Wizard of Oz. One imagine Buell gave MGM some kind of package-deal… Hero Curtis lived to the age of 79 [Krebs lived even longer, reaching 85], and had a solid career, including a significant role in High Plains Drifter.

The odd thing is – and this is presumably entirely unintentional – is that in many ways, this is remarkably progressive. No-one even mentions the size of the protagonists after the introduction, and you cease to notice the size of the performers, except occasionally when forced on you, by things like the saloon doors. When everyone is the same height, no-one is a midget, and no-one is a giant – they’re all just people, and the result is, it’s a perfect demonstration of the wide spectrum of lives that the undersized can play. Good or bad, young or old, this is the ultimate expression of little people being depicted purely as human beings – nothing more, nothing less.