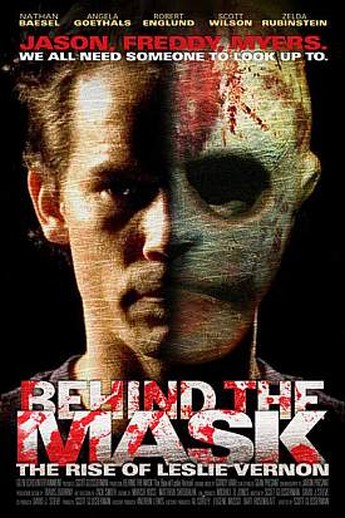 My tolerance for post-modern, self-aware horror is usually pretty low – I loathe Scream with intensity – yet this manages to do it smartly, in a way that it’s probably not exaggerating to say will change the way we view future genre entries. Student journalist Taylor Gentry (Goethals) and her crew are working on a story where she follows self-admitted killer Leslie Vernon (Baesel), who is seeking revenge on the townfolk for forming a lynch-mob and throwing him over a waterfall decades previously. Vernon is meticulously setting up a night where he’ll slaughter a number of local teens, in strict accordance with the standard procedures of horror movies. This means the horny couple get it first, while the virgin is left to last, after disposing of his ‘Ahab’, in this case a psychologist who knew Leslie as a youth. Is everything quite as it seems? Or does Leslie have plans beyond the ones he’s telling the TV crew?

This is often great, such as when Leslie is detailing the preparations necessary for his night of terror, allowing him to remote-control the house-lights, etc. and why killers never reach into the closet where their victim is hiding. It’s genuinely intelligent writing, and I love the conceit of a world where Jason, Freddy and Michael are real people [there are cameos from a number of horror icons, including Robert Englund and Kane Hodder]. The movie is somewhat less successful when the fourth wall goes back, and the film becomes the slasher film it is critiquing. Too often, it succumbs to the Scream-like – and incorrect – theory that pointing out cliches, stops them from being cliches, and Chris guessed the big twist well before it happened. Overall, though the performances are adequate, the script is what makes this work, and it’s a impressive and remarkably assured debut for co-writer/director Glosserman.