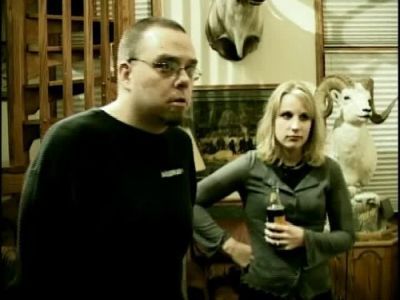 Well done Pendulum, for another movie so obscure it doesn’t appear in the IMDB [2022 update: it does now!]. I would, however, have been more impressed had said film not largely sucked. Nate (Fenema) is in a ghost-hunting team making a documentary. However, after kicking some flowers about on a grave, he is plagued by nightmares, and when these start to seep over into his day life too, becomes increasingly unhinged. It’s the kind of storyline that stands or falls on the central performance, and needs to be pitched carefully to retain the audience’s sympathies. To be blunt, Fennema isn’t up to it, and as a result you don’t care what happens to him. The production values are pretty cheapskate as well, with the makers overusing all the “effects” buttons on their camcorder. Even this’d be forgivable with a solid plot, but at the end, an entirely different reason is given for the harassment, negating much of what’s gone before.

Credit is due in some areas, such as using local bands to provide the music – while it may not always work here, I appreciate the effort and this helps both sides gain exposure. There’s also a decent heart-ripping. Beyond these points, however, I’m struggling to find much in a positive vein to say about this. There are scenes where the lighting is so badly set-up (artificial) or used (natural) that it becomes near-impossible to work out what’s going on, and at one point the top half of the frame is a big, black blot. It would be charitable to describe the dialogue as poorly-improvised; at least, I hope it was improvised, as if not, large chunks are delivered amazingly badly. Overall, this is a disappointing note on which to end the box-set.