The imagination on view in the German-produced global mess appears to have stopped at the “We’ve come up with a somewhat cool killer” angle. Yeah, the idea of someone in a Crusader’s helmet, going round, killing sinners with an extremely spiky cross sounds… Okay, sounds pretty fucking ridiculous now I’m writing it down on a sunny Monday morning in September. But you can see how it could have been the impetus for a script. What’s surprising – and unfortunate, in that it led to 90 minutes of my life I’ll never get back – is that at no apparent point thereafter did anyone come up with anything else even remotely original or interesting. 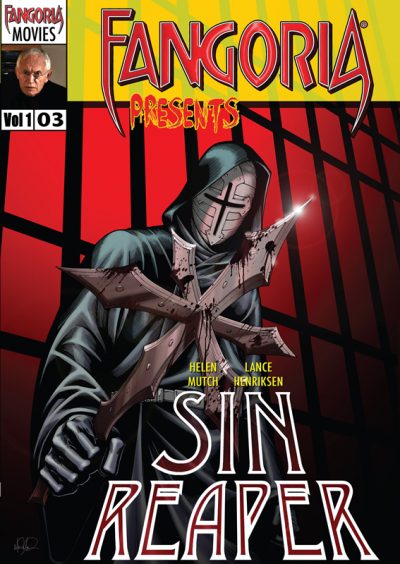 I mean, stop me if you’ve heard any of this before.  Adoptee Samantha Walker (Mutch) is troubled by dreams in which she’s part of a religious order, who ends up being offed by the previously mentioned killer. Her psychiatrist (Henriksen) discovers, based on Sam’s drawings, that the location matches perfectly a castle in Germany. Naturally, rather than sensibly deciding “Let’s cross Europe off my holiday plan,” Sam decides to go and investigate. Something about “taking it to the next level.” TIL that horror movie idiocy had levels. So she goes, instantly bonds with another tourist (Thomas), and gets the entry-level exposition lecture, before being kicked out of the place by the suspiciously-acting owner.

Naturally, they and a bunch of his eminently-disposable friends then decide to sneak into the place at the dead of night. I’m guessing that qualifies participants for the master-class level of horror movie idiocy, since it goes about as well as anyone who’s ever seen this kind of film would predict. For they naturally encounter the Sin Reaper, who traps them in the castle and hunts them down, one-by-one, before being revealed to be… Well, I won’t spoil it for you. The first 80 minutes of this should have done that quite competently, since it’s utterly forgettable, with few redeeming features. People behave thoroughly dumbly, and don’t even have the decency to die in interesting or messy ways. Given it was originally intended to be 3D, this should offer lots of opportunity for entrails in the face, etc. No such luck.

Anyone expecting significant Lance Henriksen will be equally disappointed. He is in the film for about 10 minutes, despite his name featuring prominently in the advertising. The pluses a presence like his gives a film, in terms of marketability, is obvious. The minuses are equally clear, in that his veteran presence ruthlessly exposes any flaws in the performances of the less experienced actors. Those are legion here, for the great majority of the supporting cast must be majoring in “English as a second acting language,” and are barely scraping through, much as the film does. It offers few, if any surprises, and you don’t give a damn about the fate of the characters. This limps along to its telegraphed conclusion, when you’re left simply to wonder why the hell Fangoria chose to attach their name to this completely forgettable piece of Euro-nonsense.