One thing good satire does, is stick with you. Once you’ve seen Monty Python and the Holy Grail, it’s very difficult to take any Arthurian adaptation, or even a film simply set in the Middle Ages, as seriously as it wants. Any mention of the plague immediately triggers an urge to start yelling, “Bring out yer dead!” Hot Fuzz did the same thing for contemporary Satanism; I’m now unable to tolerate any mention of modern-day occultism without whispering, “It’s not murder, it’s ketchup.” Well, except for The Wicker Man, obviously. It gets grandfathered in, due to sheer awesomeness. [I really should not have to point this out, but in case younger readers are confused, I am not referring to the Nicolas Cage version] Everyone else? You’ve got some uphill work ahead of you. 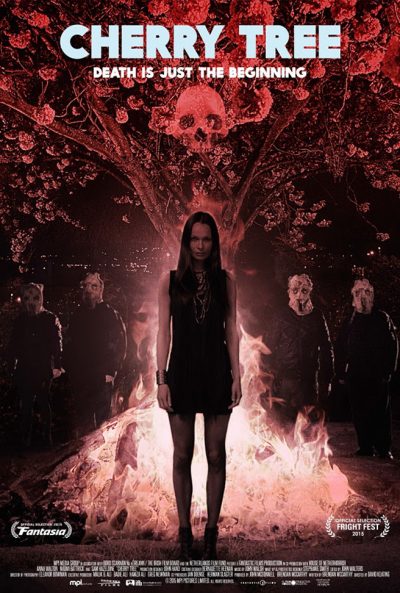 Keating had previously gone down the same road with Wake Wood, which was critically approved, yet didn’t impress me much. He’s back again, and the only thing that’s changed is the critics were a good deal less impressed this time round. 15-year-old Faith (Battrick) is distraught when she discovers her father (Hazeldine) has had a relapse in his fight against leukemia. Her gym teacher, Sissy Young (Walton) offers her a literal deal with the devil. If Faith provides a child for the coven, Sissy will ensure that her father’s health is restored. Minor catch: Satan will be the baby-daddy. What could possibly go wrong? Clearly, Faith needs to brush up on her knowledge of classic horror cinema, because if she’d seen Rosemary’s Baby – hell, even To The Devil a Daughter – she’d know this kind of pact never ends well for the momster.

It does actually start off quite well, with Battrick putting over a natural performance that’s simultaneously spiky and endearing. However, the scripts rapidly abandons any attempt to be grounded. I think the cut-over point for me, was the descent into the underground Wiccan theme park beneath Sissy’s massive manor. Thereafter, it lurches from one excess to the next, such as the scene where Faith is impregnated by a classmate possessed by the devil. Which means his eyes turn black and creepy-crawlies bust through everyone’s skin apparently. They seem to be going for a bit of a Clive Barker vibe, not least in John Walsh’s score, which echoes Christopher Young’s one for Hellraiser. This might be okay, if Barker had any relevance to horror since about 1995.

That could be the issue here. This might have worked, made in about that era, with someone who knew not to take this shit as seriously as is apparently intended here. Think Ken Russell. Think Lair of the White Worm. Have some goddamn fun with the concepts here, rather than trying to make Satanism about as appealing as a Catholic mass in the original Latin. The ending has come in for a good deal of criticism, yet despite its undeniable flaws, it will probably stick in my mind rather longer than virtually anything else in the overwrought and under-written throwback.