It it wrong of me to point out they’re not schoolgirls and don’t hitch-hike at any point? I admit, a more accurate title, such as Twentysomething Campers, wouldn’t have quite as much sales sizzle… I didn’t realize when I started watching this bit of softcore nonsense that it was directed by Rollin, though was not in the least bit surprised to find out. It has most of the trappings you’d expect, albeit without any of the horror leanings he liked to incorporate. Indeed, this is almost a reversal of the same director’s Fascination, with less – okay, no – vampires. There, a group of thieves took shelter in a remote house inhabited by attractive young women. Here, the attractive young woman take shelter in a remote house inhabited by a group of thieves. 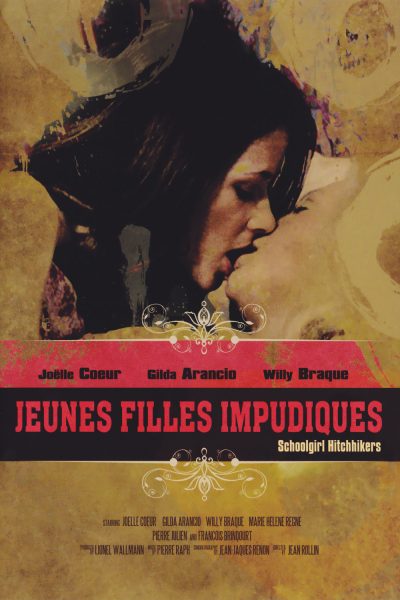 The women here are Monica (Coeur) and her bisexual lover Jackie (Arancio) who are on a camping trip when they stumble across the country house, deciding a proper mattress would make a pleasant change from roughing it in the woods. And who can blame them? After a good night’s sleep (and not a little lesbian canoodling), the ladies “meet” Fred (Braque). Quotes used advisedly, if you know what I mean, and I think you do. They then go their separate way, unaware he’s part of a gang of jewel-robbers, charged with keeping an eye on their stash of stolen gems. When Fred discovers the loot is missing, suspicions inevitably turn to the two “schoolgirls”, not least by his sadistic boss Béatrice (Règne). Monica is able to escape and reach a local cop, but on returning to the house, no-one is there…

The similarities to Fascination also highlight the main problem here. This desperately needs a strong, central performance to hold everything together, in the way Brigitte Lahaie did for Rollin six years later. You sense Règne is trying, but isn’t up to the task, and everyone else seems to be looking around, waiting for someone to take the lead. It’s not entirely without interest. The main areas which work are an effective, if extremely seventies, jazzy score, which reaches its percussive peak during a skirmish at the mansion, and the cop’s gun-toting “secretary” (according to the IMDb), who does a better “schoolgirl” impression than either of the two leads, and is wearing a skirt so short, it deserves to be re-categorized as a belt.

At not much more than 70 minutes, it is wise not to stick around, since the idiotic actions of… well, just about everyone present here are likely to cause exasperation in viewers. Much of this makes little or no sense. For example, I can only presume the “torture” sequence in which Jackie has her hair cut, out of shot, was to cover up the real actress similarly going from long to short. This is one for Rollin completists only, without much to recommend it to a more general audience.