The late seventies saw two venerable British cinematic institutions stagger into their grave, unable to adjust adequately to the rapidly changing times. Hammer Films was on life-support, and the Carry On series was also on extremely thin ice after the disaster which was Carry On England. To resurrect things, the makers wisely brought back many of the regular crew, who had been missing from England. But they also made the ill-fated decision to try and ape the British sex comedies that were seeing some success at the time, such as the Confessions of a… series, while also throwing an extra N into the name of a certain French sexpot. The results manage largely to be neither sexy nor comedic. 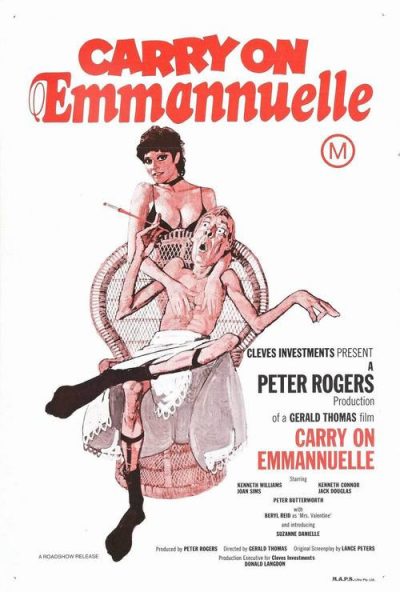 The plot has Emmannuelle Prévert (Danielle; I can only presume Françoise Pascal was unavailable) going to London to join her husband, the French ambassador Émile (Williams, sporting a French accent which makes those wielded in Holy Grail seems like a masterpiece of subtlety). Following an unfortunate nude sky-diving (!) accident, Émile is unable to satisfy his wife, and she takes solace in the arms of… just about any male within reach, including his staff, visiting politicians, and two entire football teams plus the referee. Her first conquest, mommy’s boy Theodore Valentine (Dann), develops a crush on her and starts stalking her, refusing to accept she has moved on. This does result in the only exchange which actually made me laugh, between Theodore and his disapproving mother.

I dreamed about her last night.
Did you?
No, she wouldn’t let me.

There: I saved you the bother of watching this, which desperately needs someone like Sid James to humanize the sleazier aspects – his unmistakable laugh would likely have helped significantly. Though it is actually kinda cool how Emmannuelle is such a complete and unashamed slut, something made especially clear in a TV interview at the end (the interviewer played by long-time Benny Hill associate, Henry McGee). In comedy terms, however, the vast majority of this is just not amusing, and I’m at a loss to see how it could even have been considered so at the time. The content is considerably more restrained than the films it’s attempting to reference, and so the net result is a sex comedy which is neither sexy nor funny. At least the Confessions series had the good sense to deliver on the nudity viewers expected. Here, you get to see far more of Kenneth Williams than anyone else, and it’s not a pretty sight.

If Carry on England put the series on life-support, this entry unplugged the machine and firmly placed a pillow over its face. It would be 14 years before the final nail would go into the coffin, in the shape of Carry on Columbus, but this marks the last appearance for many of the films’ regular cast,  including Williams, Kenneth Connor, Joan Sims and Peter Butterworth. It’s a sad near-epitaph for perhaps the most thoroughly British movie franchise of all time.