I agonized over whether or not to check the “horror” category on this one. Well, “agonized” is probably too strong a word, since it implies a depth of giving a significant fuck about the film, which would largely be inaccurate. While there is a non-zero body count here, and the plot could be summarized as, “a bunch of young people in a confined space being terrorized and offed by a psycho,” it seems that Phillips is less interest in that aspect, then the interplay between the characters. However, neither he, nor largely the cast, have the ability to pull that off, and the results generally range between dull and cringe-inducing. 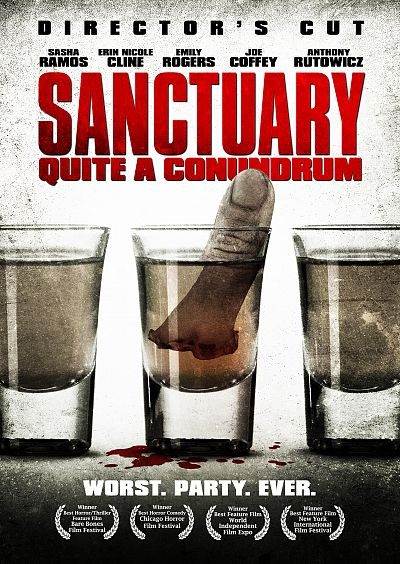 The latter would be the female leads Mimi (Ramos) and Tabitha (Erin Cline) – my interest in them evaporated entirely, the moment they started singing Nelly at each other. These are people I would actively move to another room to avoid, with few redeeming characteristics. This might be deliberate – the official website calls them “over privileged twenty somethings who care about nothing but themselves” – but if so, what’s the point? Why should we care what happens to them either? Phillips doesn’t give us any reason for that, yet nor are they bad enough, we root against them. They’re simply… unpleasant.

One of them is having an affair with an older, married man, and we first meet her, berating him for his sexual inadequacies, and tossing him out of her apartment. Later that day, when Mimi and Tabitha are having a pool party, he shows up and blows his brains out into the pool. Which is a bit awkward, especially when his wife comes knocking on the door. Meanwhile, little sister Kylene (Rogers) is having issues of her own with her boyfriend Harris (Rutowicz) as well as his religious fanatic mother, and one of the party guests turns out to be a barely-repressed psychopath, and the dead body in the pool sets off a homicidal killing spree there.

It’s all rather contrived, not least the reasons why nobody gets round to calling the police, even as the bodies stack up like cordwood. Which wouldn’t necessarily be an issue, if the characters and performances were good enough to put the viewer in a forgiving mood. They aren’t: Rogers does the best job of putting together a character you don’t want to hurl from a moving car, but it’s all relative. The bits that work best are the more horror-inspired ones – when things are actually happening, and the plot is moving forward. Unfortunately, too often they aren’t, and people are simply flapping their lips at each other, with dialogue that is not anywhere near as amusing as Phillips think. Then, this descends into the hell of low-budget self-indulgence.

Sanctuary; Quite a Conundrum is available now, through Midnight Releasing.