This starts off as a thriller, quickly shifts into horror, whizzes quickly through SF, and ends up somewhere beyond all of them, in a way more likely to leave the audience bemused than amused. Renee (Rapace) is a single mom, struggling to bring up her son, with all the typical problems that entails – and some less expected ones, such as the unexplained presence of security cameras, silently recording their every move. After she drops him off at his father’s for a parental visit, Renee is abducted from the side of the road, and taken to a poorly-lit research facility, where she joins 20 or so other abductees from all over the country. Why was she chosen? What are they trying to do? Does she have any hope of escape? 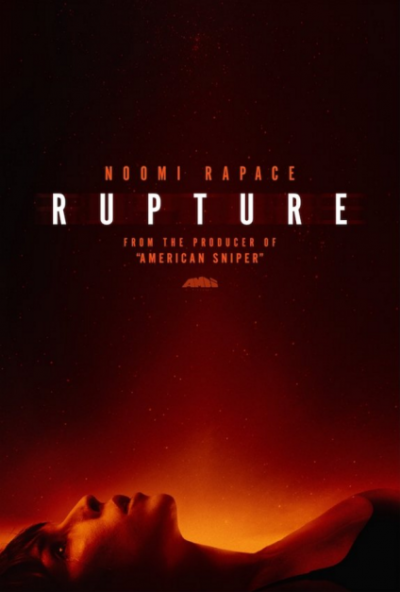 The film does address all of the above questions. Though I have to say, you’re not necessarily going to like the answers, and it ends in an abrupt way which suggests less a satisfactory tying up of loose ends, and more the production running out of film. For as usual, this kind of conspiratorial movie is a good deal more effective when generating the sense of paranoia, than when trying to address it and provide solid explanations. The concept of trauma-based breakthrough at its core is not a new one: Martyrs took the same route, with an equally chilling indifference to the suffering of the subjects. However, the purpose there was both more plausible and more banal in its irrelevance. Here, you have to wonder if this was really the best way for the antagonists to achieve their goals.

It works rather better when Renee is scurrying through the air-ducts of the facility, overhearing snatches of conversation and attempting to piece together the jigsaw. This is impressively claustrophobic, even if I had to wonder why she headed back to her cell, rather than continue trying to escape. That’s especially so, since Rapace had been nicely sympathetic, driven by a devotion to her son and wanting nothing more than to get back to him. But when the picture eventually becomes clear, and the audience realizes who is behind everything, the film fails to take its viewers with it. I was left hoping the plot was going to turn back on itself, and tell us that this revelation was a bluff designed to ensure – oh, I dunno –  no-one would ever believe the victims.

Instead, the further it goes, the flimsier is the web it spins, and it ends up feeling more like an incomplete set-up for another movie entirely. It’s not without intrigue, certainly, and you are left wondering where the story might go from there: would mother love win out in a battle with the hidden forces unleashed inside Renee by her traumatic ordeal? If that had been the second half instead, it would probably have made for a more satisfying, and likely more interesting, tale than the lost plot we instead are given.