If you want an example of “this feature would have been better as a short”, look no further than this Belgian obscurity, which would play well at 15-20 minutes. Unfortunate, then, that its running time is 81 minutes. And obscurity isn’t just its lack of distribution, it’s also applies equally to the narrative, which regards explanations as vastly over-rated. 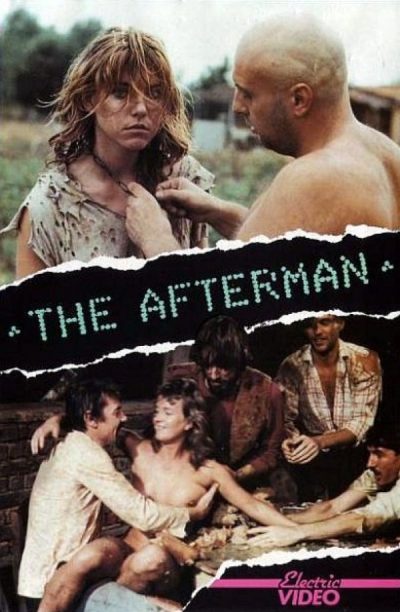 It seems to take place after an apocalypse of some kind. Our unnamed hero (Verbist) sits in a bunker, watching footage of old wars, eating spray cream directly from the can, and occasionally molesting the deep-frozen corpse of a woman. The system in charge eventually kicks him out, and he discovers that life outside has not exactly returned to normal, with bands of outlaws roaming the lands. He falls foul of one of these, then is captured by another, no less brutal survivor, and set to work as a slave in his fields, along with a woman (Ravet). The two eventually kill their captor and head off through the wilderness. They are forced to seek refuge with a group of monks, but the price of their rescue turns out to be rather high, as this is not exactly your normal religious order, shall we say.

After the apocalypse, food and power will be in short supply. Hair lacquer and glittery make-up, however? Not a problem. Oh, and words appear almost entirely absent too, as the entire film is told without any meaningful dialogue, probably for budgetary reasons as much as anything. In that way, it’s more than reminiscent of Luc Besson’s Le Dernier Combat, made four years earlier in 1983, though the silence there was an explicit part of the apocalypse. It also had rather more of a budget, even if Van Eyck is apparently (again, it’s hard to be sure) depicting a time some time beyond everything went to hell, to the extent that, beyond the first few minutes, this could almost be a camping holiday gone really bad. Certainly, the amount of homosexual rape here is on a par with Deliverance.

Admittedly, it is fairly equal-opportunity in its approach there, and appears intent on checking off as many boxes of outrage as possible. Necrophilia? Check. [Between this, Crazy Love and Lucker, something that appears to be a specialty of Belgians!] Cannibalism? Check. Extensive lesbian aardvarking in a fully-functioning post-apocalyptic swimming pool, while our hero watches, culminating in one participant’s drowning? Check. Quite what it’s all meant to mean is far from clear, and it’s not as if there’s much of a character arc for anyone, and the only lesson to be learned here appears to be, “Stay in the goddamn bunker.” Though I think the theme is how mankind’s civilized face is merely a thin veneer, and if there’s any kind of disruption, we’ll rapidly go back to the most basic of needs. Which, according to Van Eyck, appear to be food, sex and having an Asian woman play piano for you.