They say, “Write about what you know,” and few people are probably better qualified than Marchal to tell a story about French cops. For the writer-director was one himself, and didn’t make his movie debut until almost the age of thirty. He instead served in the serious crime and anti-terrorist departments of the Paris police for 12 years, and had previously drawn upon his experiences there with the excellent 36th Precinct. That was based on a operation which went wrong, and helped lead Marichal to quit the force for a career in the film and TV industry. Since then, while not exclusively limited to police stories, it’s been a common theme, and this certainly goes down the expected . What you get here is less a “thin blue line”, than a thin morally grey one. The original French title, Bronx, is slang for mess, and it’s arguably more accurate. 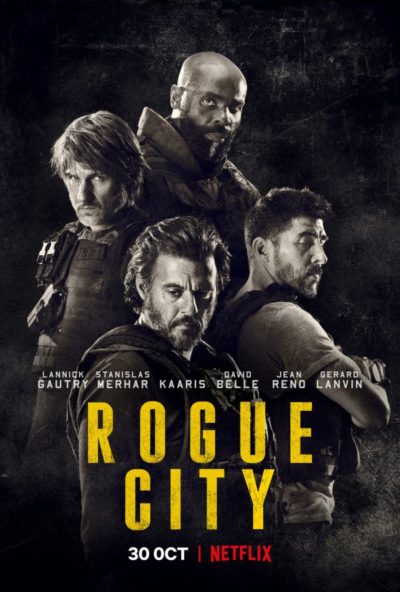 It’s set in Marseilles, in a world where the distinction between cops and criminals is perilously blurred. At one point late in proceedings, the “hero”, police officer Richard Vronski (Gautry) is negotiating with crime family matriarch Catarina Bastiani (Claudia Cardinale – about whom both Chris and I simultaneously exclaimed on seeing her name in the credits, “What, is she still alive?”). She says to Vronski, “Do you know the only difference between you and me? A police badge.” It’s an extremely obvious statement, though you can’t argue with its accuracy, and if the film has anything in its favour, it’s a consistency of tone. Expect everyone to be morally questionable, and you’re never going to be surprised by events as they unfold here. Everyone has issues, and ends up paying the price for them, in one way or another.

In terms of plot, there are a lot of threads, too many to enumerate. High concept? There’s a war between criminal gangs, and some of the cops have decided they’re best served by taking a side in that conflict. Not necessarily the same side either. So we get a murky landscape of moral ambivalence, through which Vronski – connection is made to the similarly named flawed character in Anna Karenina – and his colleagues make their way, as they try to uncover the truth behind a massacre at a club. It’s a truth which might be best left where it is, especially after a beach shoot-out in total darkness. This leads to the death of an undercover officer, and the resulting wrath of the Narcotics squad is apocalyptic in its intensity.

But the uniformity of tone makes for a rather dull viewing experience. Marchal fails to establish any particular reason why we should care about any of the protagonists, since they are morally indistinguishable from the antagonists, at least in their actions. He does no better a job of showing Vronski and crew as doing bad things for good reason. Even when Jean Reno shows up, as the new chief of police, your sense of morality has been relentlessly clubbed into a state of utter distrust, and you wait for the inevitable reveal. This opens with a murder-suicide, and it’s more or less all downhill from there.