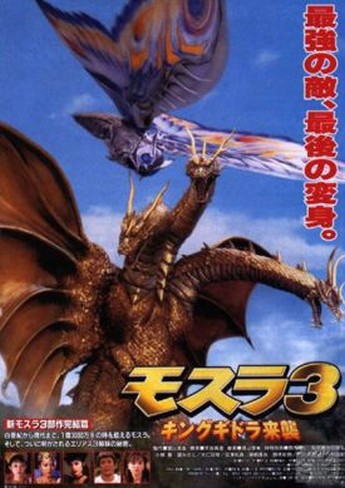 Full disclosure. We’d cracked open a bottle of wine with dinner, but Chris decided she didn’t like it, so not wanting to waste any, I polished it off. This likely improved my enjoyment of this a bit, though I was largely pleased to see the annoying kids back as supporting characters, rather than the focus as previously. A meteor brings Grand King Ghidorah back to Earth, who proceeds to abduct children, keeping them in an energy dome to feed upon their energy and easily repelling Mothra’s attacks. Worse, his spirit takes over one of Mothra guardians, Lora (Tate), turning her against her sister. Turns out the only hope is for the moth to turn into Light Speed Mothra, allowing it to travel back in time – yeah, we were making TARDIS noises at that point. This will allow her to battle the three-headed beast on Ghidorah’s previous visit to the planet, when he wiped out the dinosaurs. The trip takes its toll on Moll (Kobayashi), meaning it’s up to evil sister Belvera (Hano) to rescue Lora.

Really, I’m thinking a Doctor Who/Mothra cross-over really needs to happen. Not only does Mothra travel through time, she also regenerates into about as many forms here, as the Doctor has done since the series restarted. And the “alien abducting children” is similar to Torchwood: Children of Earth. That aside, there’s the question of, if Mothra stopped Ghidorah from killing the dinosaurs, why doesn’t this result in a modern era filled with T-Rexes? However, as ever, asking for logical sense in a Mothra flick is a bit of a forlorn quest, and this is made up for, with a number of spectacular battles, although the dinosaurs are remarkably plastic, to the extent where the T-Rex could have wandered in from Toy Story. The various versions of Mothra are also pretty cool, particular Armour Mothra, which doesn’t so much fight Ghidorah, as pull its wings off, and the trio of siblings finally get centre-stage, and (sort of) resolve their differences. A solid enough conclusion to the trilogy.