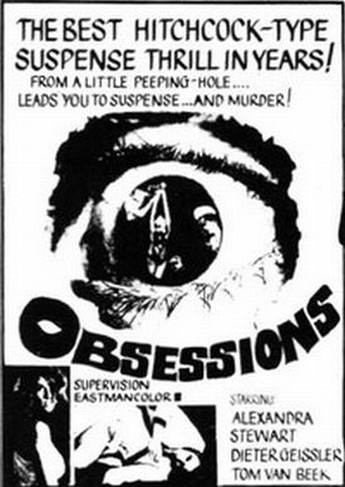 Back before Martin Scorsese reached fame in the seventies, he was one of the writers on this Dutch-German psychological thriller, that seems to be aiming for something in the spirit of Alfred Hitchcock – not least in its pulsing music, by Bernard Herrmann (though not apparently composed specially for the film, but taken from unused scored Herrman had written for American TV). However, it comes up short, with a plot which relies too much on freakish coincidence and illogical behaviour by the participants. Nils (Geissler) is obsessed with spying on his neighbour (Van Beek), and his bizarre behavior with a series of young women, including such things as chaining them up naked, in his bath-tub. Meanwhile, his journalist girlfriend is looking into the murder of an American GI, and whether it connects to his model girlfriend, who was released from jail after serving a sentence for drug possession, immediately before the death, and has now gone missing. Unsurprisingly, these two strands end up connecting, in the most fortunate of fashions for the plot.

That’s one of the problems, and another is Nils’ extreme reluctance to contact the police, even given the very strange things to which he is witness. Of course, this was the Netherlands in 1969, which could perhaps have been a society of epic tolerance. But, still… Given this, the fashions, hair, fabrics and furniture provide an interesting distraction, and there are moments where de la Parra lets rip, stylistically, hinting that Nils’ hold on sanity could be getting a bit tenuous. The film might have been better off to go down that road, despite the English-language title, the hero comes over as creepy, following one of his neighbour’s women to a nearby apartment and banging her there, which seems naughty, even for Amsterdam 1969. The story does a good job of doling out information to keep you intrigued, but I wouldn’t be surprised if you reach the final revelation – largely pulled by his girlfriend out of thin air – and raise an eyebrow at its nature. Trying to out-Hitchcock the master is a tough feat to pull off, and this falls some way short of that task in the final analysis.