Japanese salaryman, Takafumi Katayama (Omori), signs up for a year’s membership at S&M club “Bondage.” Two things stand out: their dominatrixes come to you, at times and places of their choosing, and no cancellation is permitted. Initially, Takafumi enjoys the bizarre scenarios that arise, such as when he’s eating dinner at a sushi bar. But as things get more intense, he begins to have second thoughts, especially after his son (Nishimoto) is exposed to the incidents. However the club refuses to let him out, and things escalate further, with visits from dominatrixes such as the “Queen of Saliva” (you don’t want to know) and the “Queen of Gobbling” (you really don’t want to know). Help is vaguely at hand, in the form of a quasi-official organization, devoted to stamping out anti-social behaviour. 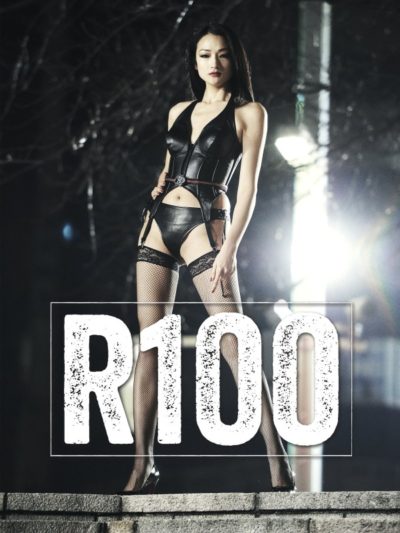 Well, this was certainly… something. If you’re looking for something that makes coherent, consistent sense, best avoid. For this willfully seeks to go in other directions. One example: intermissions, in which a censorship board discuss the movie on their smoke breaks, including pointing out plot-holes and talking smack about its supposedly 100-year-0ld director. [The title is a reference to this director reportedly saying no-one under the age of 100 will “get” the movie. Hence “R100”, in the same sense as “R18” or “PG-13″] That’s actually one of the conceits which works better, not least because you’ll perhaps find yourself nodding in agreement with the crew’s sentiments. Certainly, I’m clearly too young to get it.

However, other elements feel forced or irrelevant, such as Takafumi’s wife, who is in a coma. There’s no resolution to this particular plot-thread and no particular point to it either, and it’s not alone in either category. Things are better when focusing on the core concept: the escalating war between its hero and the Bondage corporation. This begins with the accidental death of one employee, and builds from there, until it brings down on Takafumi, the wrath of the company’s CEO, played by 6’8” former pro wrestler, Lindsay Kay Heyward. She mounts an all-out assault on his house, to the strains of the old Ludwig Van, ending in her literally taking him out to the woodshed and a rendition of Ode to Joy.

But to reach there, you have to sit through a lot of stuff which, being kind, perhaps makes more sense to its native audience. I’m sure the repeated scenes in which people think they feel earthquakes is significant in some way; it’s just not clear to me, what that is. It is good at portraying the nature of professional sex workers, with the women typically wearing blandly bored expressions, yet still being human (the accident victim is described by a colleague as being fond of animals). Quite what Takafumi gets out of it, is harder to say. It’s almost a contradiction in terms, such as when the film abandons him at a bowling alley, waiting for an encounter that never happens, because its absence is sado-masochism in itself. The film seems similarly intent on with-holding pleasure from the audience, as much as providing it.