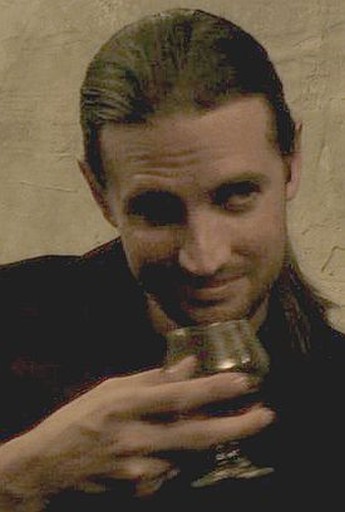 Working as a waitress in a bar, Trish (Leigh) encounters the mysterious Emmett (Forsberg), whose hidden depths are appealing, when compared to the boors Trish usually gets to meet. Along with a couple of friends, she invites Emmett’s invitation to go out to his house, in the middle of nowhere. There she meets Lydia (Joy), but as the evening progresses, events start to unravel, and Trish realizes that Emmett is not the suave sophisticate he appears – or, at least, not only… However, there is no way for her to leave, and she has little option but to deal with events as they unfold. Meanwhile, out in the desert, someone or something is roaming, eager to make a meal of anyone who crosses its path.

It pains me to write this, because I’m usually a big supporter of low-budget, local horror. However, the first hour of this is just incredibly painful to watch, being little more than a bunch of characters sitting around talking at each other. The dialogue desperately wants to be menacing, with undercurrents of threat, but somewhere between the writing and the delivery, mutates into simply “highly annoying.” Emmett (right), in particular, far from coming over as a Manson-esque cult leader, had us yelling “Shut the fuck up!” at the screen on multiple occasions, as he meandered off into another irrelevant speech. His appeal is completely lost on me, right down to his dyed-blond ponytail. Is this really what chicks like these days?

Things do improve somewhat when the carnage finally kicks off, with Trish having to make some difficult decisions on what she is willing to do for survival, and I’ll admit, we didn’t see the twist at the end coming. However, to get to that stage, you have to sit through a huge amount of extremely tedious rubbish, such as repeated cutaways to two characters dancing with each other. The sheer volume of padding is startling, and kills any chance of this being even passably entertaining.